Go Back to the List April 16, 2020
India losing out as South Asia students turn to China

China is beginning to attract more students from India’s neighbouring countries than India itself, despite India’s advantages in proximity, culture and the English language in higher education, say the authors of a new report by think tank Brookings India, who say this could reduce India’s regional soft power and higher education attractiveness.
In the past five years (2014-19), the growth in the South Asian student population at Indian universities and colleges has plateaued, notes the report titled Is India Still the Neighbourhood’s Education Hub? released last month, while the number of inbound students from India’s neighbourhood to China has increased by 176%. Numbers coming to study in China rose from 6,879 in 2011 to 18,966 in 2016.
Historically, India has been the destination of choice for students from the region – from Afghanistan, Bangladesh, Bhutan, Myanmar, Nepal and Sri Lanka.
With the exception of Pakistan, which has a particularly close relationship with China through the latter’s Belt and Road Initiative and a fraught relationship with India including military conflicts, “almost every country in the South Asian region now sends the same number or more students to China as to India,” the report says. In 2016, for example, there were three times more Bangladeshis studying in China (4,900) than in India and 17 times more students from Myanmar in China than in India.
China is not just a draw for students, but “India is rapidly losing attractiveness for students from neighbouring countries”, said report co-author Constantino Xavier of Brookings in New Delhi.

While students from South Asian countries excluding Pakistan still constitute half of the total foreign student population of 47,427 in India, annual growth in the number of foreign students in India from the neighbourhood has decreased from 30% year-on-year growth in 2013 to just 9% growth last year. Year-on-year growth plateaued to zero growth in 2017-18.
Main reasons
“We found a mix of reasons, including regulatory and visa hurdles, but none is more significant than the quality of higher education,” Xavier notes pointing to significant Chinese investment in higher education quality, including many programmes taught in English.
“China tremendously stepped up the number of scholarships for students from South Asia, but in the end, it’s quality and cost competitiveness that really explains the variation in the country’s attractiveness to foreign students,” Xavier told University World News.

Regulatory obstacles
Instead, Xavier points to “tremendous regulatory obstacles”, such as the difficulty in getting visas. “It’s even difficult to find out which universities offer which degrees, so it is a lack of information often.”
Except for a dozen or so very active private universities, “the majority of the smaller colleges or universities do not have an active outreach programme internationally and they don’t recognise the benefit of the foreign exchange potential of attracting foreign students,” Xavier says.
Xavier adds that with the coronavirus pandemic, however, “proximity may become more salient and may benefit India more than China, Australia or Japan or the universities further away”.
“The questions of distance, transportation, worries of parents and in the farther away [countries] rather than next door – that may benefit India or may be a blessing in disguise over the next one or two years,” he said. Though it also depended on how countries were dealing with the crisis and how soon they get out of it. 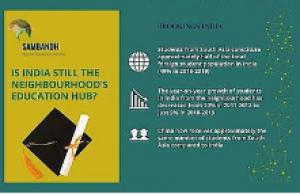 Read More
Written by Yojana Sharma,
Source link: https://www.universityworldnews.com/post.php?story=20200416085719846
Previous Next
Upnext in
Disclaimer UniAgents does not author any news or content in this section. We aggregate News Headlines, Summary, and Content from over 700 sources, explicitly listed in every article/page. Users can visit the sources for full articles and more local news. The sole aim is to aggregate education news from around the world so they can be categorised and the user can have a personalised experience. In some cases, the original article has news in native language but listing on UniAgents for each article is done in English. There are no copyright infringements, as we do not claim to produce any content mentioned on this page, all relevant sources are mentioned. For any clarifications, do not hesitate to contact us.