Go Back to the List September 26, 2018
Government probes KIU degrees

Kampala. The National Council for Higher Education (NCHE) is investigating some courses being taught at Kampala International University (KIU). Dr Alex Kagume, the NCHE acting executive director, told Daily Monitor yesterday that the probe comes after reports that the institution is teaching unrecognised programmes. He, however, did not indicate which courses are being queried nor did he say how long it would take them to give feedback to the university. “I will not speak on individual institutions because these are our clients. But KIU courses are being investigated. We got information and we have to find out the truth before any action is taken,” he said. He advised individuals who want to be sure whether courses being offered in the various institutions of higher learning are accredited to seek clarification from the council before they enrol. “If you are interested in a particular course, you can write to us and we will give you information,” he said. By May, NCHE had not recognised about 13 courses at KIU but they had students enrolled on them. Yesterday, the KIU acting deputy Vice Chancellor in-charge of academics, Prof George Nasinyama, dismissed the claims saying they submitted all their programmes to NCHE for review. “We are reviewing most of our curricula. These programmes had reached a stage that had to be reviewed and that included the engineering courses. We are in touch with the responsible bodies,” he said in an interview. He added: “There are courses they returned with minor corrections, a few had major corrections but we have reviewed and submitted them to council again. I will be checking on NCHE tomorrow to get the progress.” Several students, especially on engineering courses at KIU, demonstrated about two months ago demanding an explanation from the university’s management on why they were admitted to unaccredited programmes. The law The students said most of their colleagues who had graduated were finding trouble with many employers questioning their competence. The Universities and Other Tertiary Institutions Act (2003) demands that no university or tertiary institution offers courses that have not been verified by the regulatory body to certify that they meet the market demands. On October 30, 2017, the university management wrote to NCHE to have 54 of their courses accredited. However, the courses fell short of the minimum standards according to inspection reports from NCHE. Council then wrote to KIU officials informing them about the fate of those programmes on February 2, which letter was received by KIU’s Dr Clare Mugasa on March 5. Explaining the anomaly in May, the then deputy vice chancellor-in-charge of academics, Dr Annet Kezaabu Kasimbazi, said the affected courses, which needed accreditation, were those in the school of engineering which NCHE had previously given a blanket accreditation that expired in 2016. She further added that the other submissions were courses which were already accredited but required to be reviewed after five years. “I understand there was a gap. They (NCHE) said we must go and revise them and come back for proper inspection. This was not done and that blanket accreditation expired in 2016. We should have run immediately to have these accredited. But we had several other things we were focusing on like ensuring that the PhD programmes were secured. There is a cordial relationship with NCHE, if our students have challenges, we have negotiated before and we will ensure the best is done,” she said. Dr Kasimbazi has since left the university after tendering in her resignation about a month ago. The university asked NCHE for a grace period of three months to have their laboratories equipped. NCHE requires that programmes are reviewed after every five years to ensure emerging issues are accommodated. 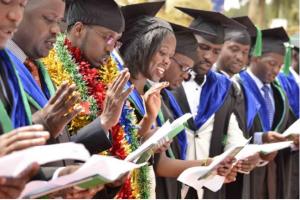 Read More
Written by ALEX ESAGALA,
Source link: http://www.monitor.co.ug/News/National/Government-probes-KIU-degrees/688334-4777898-ko787c/index.html | http://www.monitor.co.ug/News/National/Government-probes-KIU-degrees/688334-4777898-ko787c/index.html
Previous Next
Upnext in
Disclaimer UniAgents does not author any news or content in this section. We aggregate News Headlines, Summary, and Content from over 700 sources, explicitly listed in every article/page. Users can visit the sources for full articles and more local news. The sole aim is to aggregate education news from around the world so they can be categorised and the user can have a personalised experience. In some cases, the original article has news in native language but listing on UniAgents for each article is done in English. There are no copyright infringements, as we do not claim to produce any content mentioned on this page, all relevant sources are mentioned. For any clarifications, do not hesitate to contact us.