HCM CITY — Vietnamese universities have devised flexible plans to ensure final-year students can graduate despite the extended school closure due to COVID-19.
Bùi Hoài Tháº¯ng, head of the HCM City University of Technology’s Training Department, said though the graduation ceremony, which was initially scheduled to take place in April, would be delayed, final-year students who defended their theses in November 2019 could receive their degrees before the ceremony.
Other students who were in their last semester at the university can choose to defend their theses in July or September.

Instead of handing over physical copies of theses like in previous years, the HCM City University of Transport (UT) has allowed students to email them to professors.
“Therefore, students who have received enough credits can graduate as planned,” Tráº§n Thiá»‡n LÆ°u, head of the university’s Department of Training, told Thanh Niên (Young People) newspaper.
The HCM City University of Food Industry asked all final-year students to work on their theses instead of choosing to take alternative modules as in previous years.

Hoàng Thá»‹ Thoa, deputy director of the school’s Admissions Office, said they would receive online guidance from professors to complete their work and only need to take practice tests whenever they returned to school.
The adjustment will allow them to graduate in July or August.
Final-year students who are eligible to graduate can receive their temporary degrees and transcripts from April 1 to 10 despite the delayed graduation ceremony.

Meanwhile, other universities have announced the suspension of graduation due to the pandemic.
The University of Finance – Marketing postponed its graduation ceremony from March 24 until further notice.

The university extended the deadline for the submission of theses and other supporting documents to August 3 and July 14, respectively.

HUTECH University said they had not set a final plan for students to receive their degrees. However, it had organised online theses defence sessions for final-year students.
“If the university opens on May 4, graduation will be delayed by two months compared to previous years,” said a university representative. Since March, the University of Water Management has been granting temporary diplomas and transcripts online for final-year students who earned enough credits.
Some 23.5 millions of Vietnamese students have been studying from home since February following the complicated developments of COVID-19. 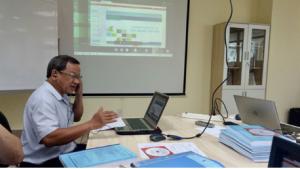 Read More
Written by Viet Nam News,
Source link: https://vietnamnews.vn/society/674902/universities-implement-different-solutions-to-ensure-timely-graduation.html
Previous Next
Upnext in
Disclaimer UniAgents does not author any news or content in this section. We aggregate News Headlines, Summary, and Content from over 700 sources, explicitly listed in every article/page. Users can visit the sources for full articles and more local news. The sole aim is to aggregate education news from around the world so they can be categorised and the user can have a personalised experience. In some cases, the original article has news in native language but listing on UniAgents for each article is done in English. There are no copyright infringements, as we do not claim to produce any content mentioned on this page, all relevant sources are mentioned. For any clarifications, do not hesitate to contact us.