Go Back to the List April 22, 2020
How Students Are Leveraging Online Study Groups

SINCE THE MIDDLE OF March, 19-year-old Lillie Burke has faced the same situation as other college students across the country. Due to the coronavirus outbreak, the freshman at Belmont University in Tennessee is finishing her semester online from her home in Tulsa, Oklahoma.

She says the transition to online learning has its challenges.

At college, Burke and some of her classmates in her digital citizenship class regularly met as a study group to ask each other questions about the material, bounce ideas for projects off of each other, and discuss future assignments. Now the group of about a half-dozen students primarily uses Zoom, a popular videoconferencing tool, to connect remotely a few times a week.

Burke also recently studied for a French exam with her classmates over FaceTime, she says.

Study groups are common among undergraduate students when it comes to preparing for exams or simply reviewing course material. In more informal study groups, students take the initiative to organize these meetings with at least a few classmates. Some colleges coordinate more formal study group opportunities where students regularly participate in sessions organized by the school, often with a facilitator leading the discussion.

At the University of Rochester, a study group leader – typically an upper-level undergraduate who took a certain class in the past – receives training to help prepare younger peers for coursework and exams and to focus on effective study techniques. These weekly groups have a recommended maximum of about 15 students who meet on campus, says Kyle Crenshaw, STEM education specialist at the school's Center for Excellence in Teaching and Learning.

But with the university's recent transition to online learning, these groups are meeting on Zoom, Crenshaw says. Study group leaders are advised to record their sessions in case some students can't attend due to issues with time zones or internet connectivity.

"We're really trying to make sure those students have that available support and that even though it's remote, that they still have that connection with the study group leader as well as the students who were previously attending," says Trenshaw, adding that the groups have seen slightly reduced attendance since the transition online.

The platforms used, the number of students participating and the exact format varies across informal and more structured online study groups. But generally, students working together online isn't limited to videoconferencing.

While many students at Arizona State University are now connecting using Zoom, another very popular platform is Slack, a messaging tool that allows students to form smaller communities, says Kyle Bowen, executive director of the learning experience at ASU.

"Doing a hybrid of using a messaging platform and a video-sharing platform – I'd say that's more of what I've been doing," says Mohit Doshi, a junior majoring in computer science at ASU. "I'll have something like WhatsApp or Slack to chat with people, or even Messenger or iMessage, and then something like FaceTime or Zoom where you're just talking to the other people in the study group."

Transitioning online for study groups presents obvious challenges. In the formal study groups, facilitators may need additional training on working with student participants virtually. In general, participants may be located in multiple time zones, and technical issues are bound to occur.

Madi Willeford, a junior at the Northwestern State University of Louisiana, has videoconferenced over Zoom with several of her classmates to prepare for exams in her veterinary radiology and imaging class. "At the beginning of the over four-hour meeting, there were a lot of audio issues," the 21-year-old biology major wrote in an email. "One of my classmates had to use multiple accounts, one for audio and the other for video."

Some students feel that there's simply no ideal replacement for face-to-face study groups. Beyond the other considerations, online learning requires more self-discipline.

"Finding the time to get it done while at home has been challenging – because I just feel really unmotivated because I'm at home. It's just been a challenge to adjust to that," says Madie Renner, a junior songwriting major at Belmont who has studied on Skype for her biology general education requirement course with a friend from her home in Iowa.

Still, there are advantages to switching over to online study groups. Students don't need to travel to campus. And in a time of social isolation, videoconferencing may be the best way to see classmates face to face and foster a sense of community. Burke says that she and her classmates sometimes use the study group simply as a designated time to get work done – a tool to stay motivated, even if they aren't always speaking.

Another benefit is that videoconferencing platforms often have a range of functionalities. The chat feature within these platforms can enable multiple conversations to take place at once, for example.

John Mantus, a junior economics major at the University of Rochester and a study group student leader, says screen-sharing allows him to better understand some of the issues the students in his group are having.

"They can point me directly at the problem, rather than trying to talk about it in an abstract way," Mantus says.

As with in-person learning, students can still get creative and integrate various types of media into their discussions during online study groups. For instance, Willeford and her classmates incorporated a quiz created on Kahoot! – a game-based learning platform – into a study session to test each other on veterinary radiology. They used their computers to video chat while playing the game on their cellphones.

"After each question, if someone got it wrong, we would explain the correct answers using our textbooks and notes for the class," Willeford says.

Keep the conversation flowing. Stacey Blackwell, senior director of the Learning Centers at Rutgers University-New Brunswick, says to avoid conversation gaps when completing tasks such as looking for a file. Keeping your classmates up to speed – for instance, by saying, "Give me a minute, I'm looking for that diagram" – can be helpful.

"That kind of very purposeful narration of what you're doing actually really helps to keep people engaged and just makes the session go a little smoother," Blackwell says.

Have a backup plan. Having an alternative way of accessing or participating in the study group in case Plan A falls through – for example, somebody's webcam isn't working properly – can save participants time in the long run, Blackwell says.

Find a comfortable workspace and avoid distractions. Burke says she has found it helpful to separate where she relaxes and sleeps from where she does her coursework. This enables her to stay focused on the material during online study groups.

Take advantage of the digital tools at your disposal. Burke says continuing the study group conversation offline in a group chat is helpful for coordinating and planning meetings. Experts also recommend taking advantage of the various features within video conferencing platforms – like screen-sharing – and understanding what's available beforehand.

"By becoming familiar with the capabilities of the tools," Bowen says, "they can then get creative about how to use them to solve challenges." 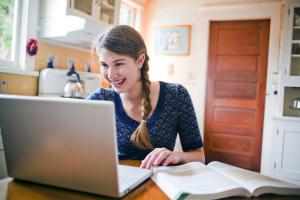 Read More
Written by Jordan Friedman,
Source link: https://www.usnews.com/education/best-colleges/articles/how-college-students-are-leveraging-online-study-groups
Previous Next
Upnext in
Disclaimer UniAgents does not author any news or content in this section. We aggregate News Headlines, Summary, and Content from over 700 sources, explicitly listed in every article/page. Users can visit the sources for full articles and more local news. The sole aim is to aggregate education news from around the world so they can be categorised and the user can have a personalised experience. In some cases, the original article has news in native language but listing on UniAgents for each article is done in English. There are no copyright infringements, as we do not claim to produce any content mentioned on this page, all relevant sources are mentioned. For any clarifications, do not hesitate to contact us.