The federal education minister, Dan Tehan, has ordered independent schools to reopen and provide in-person education to children whose parents want it in term two.

In a letter, sent to the Independent Schools Council of Australia and peak bodies in each state and territory on Thursday, Tehan stated he will use Australian Education Act powers to impose a new condition on independent schools, in effect requiring them to make classroom learning available or risk losing federal funding.

It comes as the national cabinet meets on Thursday, a further opportunity for the Morrison government to push for schools to be reopened as early as term two, which begins on Tuesday in some states.

Federal, state and territory leaders discussed how to develop a consistent national approach to which students should attend schools after the Easter holidays although no decisions were made.

Tehan’s order represents a shift away from online learning at home to classroom attendance, a move likely to spark tension with Victoria, which favored early closure of schools to contain COVID-19.

Despite rising community concern, the Morrison government opposed school closures all through March on the basis of medical advice and even used the threat of withdrawing funding from independent and Catholic schools in a bid to force them to remain open.

Closures were eventually triggered by Victoria’s decision to bring forward school holidays, and the use of pupil-free days in other states to prepare for online learning. In-person attendance at New South Wales state schools dwindled to as low as 5%.

In the letter, seen by Guardian Australia, Tehan said he was aware “a small number of independent schools have chosen to stand down all physical classroom delivery and move to alternative, or online classroom delivery”.

“While I appreciate that a number of jurisdictions are moving towards this form of service delivery, I am asking schools to retain a physical classroom environment for the children of parents who may not have a choice of keeping children at home,” he said.

“These might be the children of essential front line workers such as paramedics, nurses, doctors and police officers who, in the absence of a classroom option, are forced to make the decision to stop working in our essential services.”

Tehan added that students should “not be refused physical classroom access based on their parent’s employment”.

Tehan noted his power in the act to impose conditions on schools’ funding whether he believes them to be in the public interest.

“Therefore I am advising you that I will be varying the approval of all independent approved authorities to include a condition from the commencement of term two, requiring schools to provide a physical classroom environment for the children of parents who choose to access it,” he said.

Despite the order, Tehan also recognized the need for schools to follow “the advice of the health or education authorities of the commonwealth or the state or territory in which the school is located, including any directions they may issue in regard to school shutdowns”.

The condition provides an exception for schools following local health or education authorities’ direction if the authority “has acted genuinely and in good faith in the discharge of its duties of care to students, employees and others”.

Green noted the Victorian chief health officer had advised all schools to move to remote learning, and that “all children who can learn at home must learn from home – with exceptions only in extremely limited circumstances”.

Green said Tehan’s warning about funding “left teachers, parents and, ultimately, their students, confused and frustrated at a time of extraordinary stress”.

“I have alerted the federal minister to the practical implications of his announcement and pressed him for urgent clarification.”

On Thursday the Northern Territory government announced that school attendance will be compulsory from day one of term two, 20 April.

The New South Wales premier, Gladys Berejiklian, said her government was in talks with education experts about how to educate children and would use the Easter break to “consider our options about what term two for schools will look like”.

“But again it will be based on health advice and in consultation with all of our stakeholders, including of course principals and teachers and parent groups as well,” she said. 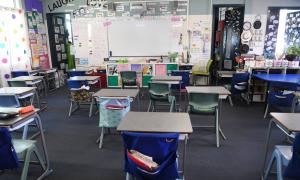 Read More
Written by Paul_Karp,
Source link: https://www.theguardian.com/education/2020/apr/09/federal-education-minister-orders-independent-schools-to-reopen-for-term-two
Previous Next
Upnext in
Disclaimer UniAgents does not author any news or content in this section. We aggregate News Headlines, Summary, and Content from over 700 sources, explicitly listed in every article/page. Users can visit the sources for full articles and more local news. The sole aim is to aggregate education news from around the world so they can be categorised and the user can have a personalised experience. In some cases, the original article has news in native language but listing on UniAgents for each article is done in English. There are no copyright infringements, as we do not claim to produce any content mentioned on this page, all relevant sources are mentioned. For any clarifications, do not hesitate to contact us.