Go Back to the List April 29, 2021
Only 7% of international students willing to complete Australian courses online, survey shows

Survey of 6,000 prospective foreign candidates finds those set on studying in Australia becoming impatient for border restrictions to lift

Only 7% of international students who want to study at Australian universities are willing to do so purely online, as hopes fade of a return to the country before next year.

Amid warnings the economic cost from the lack of international students could reach $20bn next year, student advocates say there is “no plan” to bring students back, suggesting it will be well into 2022 before they return due to the disruptions to the vaccine rollout.

Under Australia’s strict border restrictions, international students enrolled at Australian universities cannot enter the country, forcing many to study online from home. Some institutions have offered discounted fees, while others are paying the full amount while waiting for borders to open.

A new survey of 6,000 prospective international students, conducted by student recruitment agency IDP and released on Thursday, found that students set on Australia were increasingly less willing to wait as the UK and Canada were more freely allowing students in.

Errol Phuah, the national president of the Council of Australian Postgraduate Associations, said Australia’s vaccine rollout was far behind Canada, the UK or the US.

“These are our competing countries, and they are smashing us,” he told Guardian Australia.

The IDP survey found that for students still planning on coming to Australia, only 7% said they would continue to study if their courses were fully online.

Globally, about three quarters (77%) of the students said they “expected” to return to on-campus teaching by the end of 2021. Twelve percent said they expected to return between January and March 2022, 3% beyond April 2022, and 8% did not know.

At the start of 2020, a pilot program brought 63 students back to Charles Darwin University, and universities said they hoped international students could return in time for semester two in 2020.

He said students were not necessarily frustrated at the slow pace of Australia’s vaccinations, but frustrated that there was no plan or a clear date to aim for.

“What has been greatly frustrating is there has been no leadership for the most part … Everyone is blaming each other, no one is taking actual responsibility,” he told Guardian Australia.

Phuah said the government should “set a clear goal” for 2022 and “stick to it” to give international students certainty, and keep them enrolled at Australian universities.

“If you look at those data on the vaccine rollout, it is very clear. Especially the US, the UK and Canada ... These are our competing countries, and they are smashing us.

“Those countries are way ahead … so what is the plan there? We were talking about bringing people back in October this year. Right now, at the rate we are going, a lot of students have very little faith that we will be back in January 2022.

“The most we have for bringing international students back is a consultation paper. A lot of ideas have come up and been dropped.”

He added that Australia could look into quarantine centres outside of major cities, to lessen the risk of spread, or use another country like Singapore, or work with other countries to ensure international students were vaccinated before they come to Australia.

“I think the state and federal governments need to work together and not blame each other to find solutions to increase the quarantine volume,” he said.

“As the students currently in Australia finish up and leave Australia, and they are not replaced, we will have a lot more courses that are empty. We are on borrowed time, because the next three years, some students, 2nd or 3rd year students, they will be done. That is money that won’t be replaced.”

On Wednesday, a report from Victoria University’s Mitchell Institute found the $40bn that international students brought in before the pandemic – which includes broader retail and accommodation spending – could halve to $20bn because online enrolments were “trending downwards”.

One of the authors of the report, Dr Peter Hurley, said on Wednesday that new online enrolments were “actually quite low” and could not nearly make up the shortfall from physical students on campus.

“The trend is strongly down from this point onwards,” he said. “[There are] currently about 260,000 fewer international students living in Australia than before the pandemic, a 45% reduction.

“Currently 150,000 students are stuck outside Australia. Even if the country allocated half of its current quarantine program to international student arrivals – it would take a year just to bring those students into Australia.”

Of the $20bn projected loss, 36% was in accommodation and 36% was in hospitality and retail, the report found. 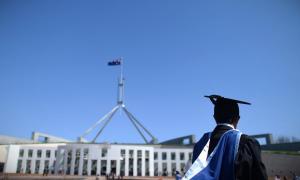 Read More
Written by Naaman Zhou,
Source link: https://www.theguardian.com/australia-news/2021/apr/30/only-7-of-international-students-willing-to-complete-australian-courses-online-survey-shows
Previous Next
Upnext in
Disclaimer UniAgents does not author any news or content in this section. We aggregate News Headlines, Summary, and Content from over 700 sources, explicitly listed in every article/page. Users can visit the sources for full articles and more local news. The sole aim is to aggregate education news from around the world so they can be categorised and the user can have a personalised experience. In some cases, the original article has news in native language but listing on UniAgents for each article is done in English. There are no copyright infringements, as we do not claim to produce any content mentioned on this page, all relevant sources are mentioned. For any clarifications, do not hesitate to contact us.