There are 1.6 times as many students studying for UK higher education awards overseas than there are international students studying in the UK, with more locations and universities engaged in UK TNE than ever before,UUKi’s latest review has revealed. According to UUKi’s annual review of Higher Education Statistics Agency data, the volume of students in 2016−17 grew in every type of TNE that HESA records, with 707,915 students (up 1%) reported by UK universities during that period. TNE activity was reported by 138 universities – six more than the previous year – and reached 228 locations (an increase of four) around the world. Four in five UK HE providers (84.7%) delivered TNE degree programs during that period, with Malaysia (74,180 students) and China (69,855) recorded as the top host countries. Overall Asia hosted the majority of UK TNE students (48.7%), followed by Africa (22.5%), EU nations (10.9%), the Middle East (9.6%), US (4.6%), non-EU Europe (2.8%), Australasia (0.6%) and South America (0.4%). Compared to the previous year, the number of students in the Middle East and the US increased by 6.8% respectively, in South America by 4% and in Asia by 3.7%. And in non-EU European countries, a 4.5% increase marked a recovery from a sharp fall the previous year. However, in one key market, Africa, the number of students decreased by 0.5% and in Australasia numbers dropped by 5.2%. “At first glance, the UK’s overseas degree delivery may look like it is setting a steady pace of growth or even slowing,” the report explained. However, the reality is far from it, the report continued, as UK HE TNE grew more quickly in 2016–17 than the previous year and extended its reach to more countries and universities. “Regional, national and local governments, and education providers across the globe are looking to work together to address both local and global challenges, with TNE as a core part of increasing capacity and sustainability for educating future generations,” it read. “The report shows that 44% of TNE is delivered through partnerships with local education providers. These partnerships can play a powerful role in increasing capacity and contributing to long term improvements in the quality and relevance of education offered to students around the world,” director of UUKi, Vivienne Stern commented. Although growth rates in Asia have slowed, the report added, the region’s maintained market share of 52% shows that the Asian market has not become saturated.

It also pointed out that despite Africa’s slight decline in numbers of 0.5%, prospective TNE partners voiced enthusiasm to work with the UK, such as via the MoU signed between the Egyptian and UK governments in January 2018.

The report suggests that the impact of the 2016 UK referendum on EU membership may be playing out in TNE registrations. However, the EU was the only region to increase its share of TNE numbers in the last year, up from 13% in 2015−16 to 13.5%, while UK HE TNE was delivered in 30 EU countries and territories in 2016–17. “Universities across Europe and in the UK have actively sought ways to embed their existing relationships and to demonstrate an ongoing commitment to collegiality and international working” the report stated. “Having had a year to establish new programs and alternative provision, this seems to have been successful.” The distribution between undergraduate and postgraduate TNE study was shown to vary greatly across regions. When the three main programs providers of distance, flexible and blended TNE – Open University, University of London and Oxford Brookes BSc in Applied Accountancy – were excluded due to their large cohorts, 65.3% of UK HE TNE students were undergraduates and 34.7% were postgraduates. Similarly, Asia was shown to have hosted the most undergraduate (63.8%) and postgraduate (30.5%) level students. In terms of countries, Malaysia, China and Egypt hosted the most undergraduates when the three providers were excluded, while Sri Lanka, UAE and Malaysia hosted the most postgraduates. 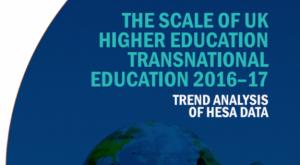 Read More
Written by Kerrie Kennedy,
Source link: https://thepienews.com/news/uk-tne-students-outnumber-international-students-60-percent/ | https://thepienews.com/news/uk-tne-students-outnumber-international-students-60-percent/
Previous Next
Upnext in
Disclaimer UniAgents does not author any news or content in this section. We aggregate News Headlines, Summary, and Content from over 700 sources, explicitly listed in every article/page. Users can visit the sources for full articles and more local news. The sole aim is to aggregate education news from around the world so they can be categorised and the user can have a personalised experience. In some cases, the original article has news in native language but listing on UniAgents for each article is done in English. There are no copyright infringements, as we do not claim to produce any content mentioned on this page, all relevant sources are mentioned. For any clarifications, do not hesitate to contact us.