Late last summer, a couple of weeks before fall semester was to begin, Jon Anderson, the newly hired provost at Southern Utah University, walked into the office of school President Scott Wyatt with an idea.

He said he thought SUU should start offering a bachelor’s degree for $9,000.

That’s a four-year degree for the equivalent of a used Subaru. Nine grand is what one month of undergrad costs at Harvard.

It’s just a third of what an on-campus SUU student who completes their degree in four years would pay.

Wyatt did not look at Anderson as if his second-in-command had lost his mind. He didn’t lecture him about the bottom line.

Instead he said: “Sounds great. When do we start?”

Just like that, Southern Utah added to its curriculum what is believed to be the least expensive bachelor’s degree of any public institution of higher learning in America. (Among private institutions, BYU-Pathway Worldwide offers a bachelor’s degree to members of The Church of Jesus Christ of Latter-day Saints for slightly less than $9,000).

Anderson’s plan, nicknamed speedway, offers a degree at $75 a credit hour. Multiply that by the 120 hours needed to graduate, that’s $9,000.

There are no frills to this program. Your bachelor’s degree will be in general studies. It is only available online and there are virtually no options, no substitutions. It’s like ordering from a set menu.

So it’s not for everyone.

Who it is for are people who don’t fit the conventional college-going mode. Maybe they’re an older person working in a career where a bachelor’s degree would mean a promotion to management. Maybe they’re a single mom, or dad, who has neither the time or the budget to get that diploma they always promised themselves they were going to get. Maybe they’re someone who lives far from any college campus, perhaps not even in America, but has a laptop and can scrape together $75 a credit. Maybe they’re a dropout who can’t figure out how to drop back in.

“We’re trying to reach a population we’re currently not reaching, a population that just doesn’t have a lot of funding,” says Anderson. “How can we deliver high-impact quality education to them at a price point that doesn’t dilute the product?”

The key to the program is “overload.” That’s the term higher education uses to describe paying overtime. Faculty members can make additional money by agreeing to teach an online speedway class as an overload. The cost to the university is minimal and the professor has extra pizza money.

Anderson couldn’t have found a president with a more welcoming ear than Scott Wyatt. Wyatt’s brand is innovation and frugality. When he was president at Snow College, his previous job, he marketed Snow as the best and least expensive junior college in the country and actually increased freshman attendance in 2013 — the year when hordes of Utah’s 18-year-olds were going on missions for the Church of Jesus Christ and every other school in the state saw extensive freshman class decreases.

Southern Utah, not coincidentally, recruited him to be its president the next year, and Wyatt immediately started trimming the sails. He cut the administrative staff down and steered taxpayer money to the teaching side of the institution. SUU is the only university in the state that has not raised tuition the last three years, while also reducing its regular online fees to a more affordable $300 per credit hour. In the meantime, the student body has grown by nearly 5,000 students since Wyatt arrived, from 8,200 in 2014 to 13,000 this past year.

“I think the cost of higher education and access for everyone is a really difficult problem,” says Wyatt. “The older I get, the more people I meet, the more struggles I see, the more sensitive I am to the need to solve this problem. Higher education is phenomenal. It’s the door that opens opportunities to everybody, but we can’t keep doing it the same way. A hundred years ago, a small percentage needed a degree past high school. Today it’s much higher, and we’ve made it hard, really hard, for them to get a degree.”

When his provost walked in his door last summer, “and said he wanted to drive down the cost of education,” recalls Wyatt. “I was exuberant.”

To launch the project last summer, Anderson’s staff sent emails to the 14,000 students who had attended SUU over the previous 10 years and left without earning a degree. That and word of mouth was the extent of the initial marketing effort.

From that pioneer class, five are scheduled to walk in Southern Utah’s graduation ceremonies this weekend. Five who almost certainly wouldn’t have walked otherwise.

Where does it go from here? Wyatt and Anderson hope this is just the beginning.

“A reporter from back East asked, ‘How do you scale this up?’” says Wyatt. “It was a good question because if you’re doing this on the overloads of your regular faculty there’s a limit to how much you can actually do. I think the answer is, it scales up because we help start a movement. We’re hoping this lights a fire under other schools and we have fierce competition from all quarters of the country. Because that will mean we’ve helped do something bigger than just here. And if other schools can do it for less than us, and better than us, we’ll be really happy about that.” 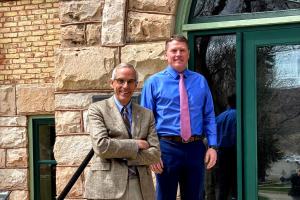 Read More
Written by By Lee Benson, Columnist,
Source link: https://www.deseret.com/2021/5/2/22403717/public-university-bachelors-degree-tuition-9000-southern-utah-university-suu-cedar-city | Southern Utah University President Scott Wyatt, left, and Provost Jon Anderson are architects of a no-frills, all-inclusive $9,000 bachelorâ€™s degree.
Previous Next
Upnext in
Disclaimer UniAgents does not author any news or content in this section. We aggregate News Headlines, Summary, and Content from over 700 sources, explicitly listed in every article/page. Users can visit the sources for full articles and more local news. The sole aim is to aggregate education news from around the world so they can be categorised and the user can have a personalised experience. In some cases, the original article has news in native language but listing on UniAgents for each article is done in English. There are no copyright infringements, as we do not claim to produce any content mentioned on this page, all relevant sources are mentioned. For any clarifications, do not hesitate to contact us.