Go Back to the List May 14, 2021
Australian universities are pushing the government to reopen borders this year and bring back international students

Almost 14 months after travel in and out of Australia was ground to a halt, the country’s universities have commenced a campaign to push state and federal governments to loosen restrictions.

On Friday, the University of Sydney called time on a national strategy that has sought to keep the virus out entirely and released a report outlining how Australia could reopen this year.

“We must accept that global elimination of COVID-19 is unlikely. Australia needs a roadmap to safely reengage with the world with the same success as we closed down,” Mark Rigotti, chair of the taskforce in charge of the report, said.

“Australia ‘won the war’ by containing COVID and minimising casualties and economic scarring in 2020, now it needs to ‘win the peace’ by safely re-engaging with the world in 2021.”

Produced by the University’s internal Policy lab, the campaign may be seen as a pushback against the Morrison government, coming just days after the Federal Budget established borders would not reopen until at least the middle of 2022.

At the same time, Education Minister Alan Tudge says he is “increasingly hopeful” international students will start coming back in volume by the first semester of 2022.

USDY’s push comes amid similar calls from Universities Australia CEO Catriona Jackson who this week claimed universities would lose another $2 billion in 2021 unless something changed.

“Australia’s university sector cannot sustain these losses without serious damage to national productivity and the country’s knowledge base,” she said.

Nor can the Australian economy wait that long, according to Rigotti.

“The future prospects of thousands of Australians will be determined by our success: small business owners reliant on international tourism and international labour, mid-career academics, people who have given their lives to creative industries, farmers struggling to deliver the harvest,” he said.

“Safe re-engagement requires industry and place specific strategies anchored in public health principles – by guiding by the objective of reopening our society – not reverting into a hermit nation.”

How Australia could open up again

Rigotti and his team claim there are three pillars to making an open Australia work.

The first is to protect Australians via a widespread and rapid vaccination program to protect at least 80% of the local populations. This needs to be coupled with a campaign to allay public anxieties around the shots, according to the taskforce, to increase the uptake nationally. The federal government is already struggling to meet its rollout targets.

So too must Australia reduce the number of cases entering at the border. USYD says could be achieved with stringent testing of the virus and the implementation of immunity requirements for inbound visitors.

Finally, the taskforce wants to see quarantine measures ‘scaled up’ and designed to meet the need of different industries. It argues that universities should be made a priority in this respect because a two-week quarantine would keep a student here for 12 months as opposed to a tourist.

In a direct appeal to the political sensibilities of the government, USYD included survey results that showed a majority of Australians were supportive of borders reopening. Asked in the lead up to the Budget, just one in five Australians said they would oppose travel between fully vaccinated nations where COVID-19 is under control.

One in four would oppose the return of vaccinated international students who were quarantined by universities.

It is this latter point which is the most crucial, after the federal government announced it would phase in flights of inbound international students. The University of Sydney is among a small group estimated to receive more than $500 million a year from Chinese students alone, and billions from international students more broadly.

It’s unclear how quickly this will get off the ground however. Victoria’s acting Premier James Merlino confirmed on Friday the state was still waiting for the government to green light a separate plan to fly in 120 “economic arrivals”, including students, each week.

Universities would clearly like to see it progress more quickly. The disappearance of these students from campuses last year forced the university sector into a cost-cutting frenzy, letting go tens of thousands of staff nationwide in a bid to cover the shortfall.

So great is university dependence on foreign students, the Mitchell Institute estimated that universities could lose up to $19 billion between 2020 and 2023 from closed borders, while costing the Australian economy up to $38 billion on top. USYD on Friday claimed its lack of students alone may shave more than 12,000 jobs from the New South Wales economy over the next decade.

On Friday, University Chancellor Belinda Hutchinson acknowledged the “significant impact” border closures have had on universities, and welcomed “calls for a staged, safe process of international re-engagement and re-opening of borders, for the benefit of students, our communities and our economy”.

Amid fears that dwindling revenues would hurt Australia’s research output, and thus its global rankings, the government chipped in $1 billion in funding on Tuesday. The deal may have come with conditions, with Jackson saying the sector would work with the government “on long-term plans for research sustainability”.

Given other concessions don’t appear to be forthcoming, universities now are taking it upon themselves to campaign for a more relaxed and profitable environment. 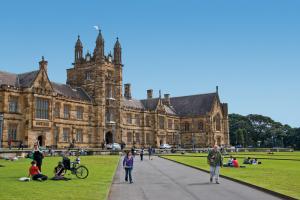 Read More
Written by businessinsider.in,
Source link: https://www.businessinsider.in/education/news/australian-universities-are-pushing-the-government-to-reopen-borders-this-year-and-bring-back-international-students/articleshow/82628797.cms
Previous Next
Upnext in
Disclaimer UniAgents does not author any news or content in this section. We aggregate News Headlines, Summary, and Content from over 700 sources, explicitly listed in every article/page. Users can visit the sources for full articles and more local news. The sole aim is to aggregate education news from around the world so they can be categorised and the user can have a personalised experience. In some cases, the original article has news in native language but listing on UniAgents for each article is done in English. There are no copyright infringements, as we do not claim to produce any content mentioned on this page, all relevant sources are mentioned. For any clarifications, do not hesitate to contact us.