Go Back to the List April 29, 2021
New Zealand and Australia 'clear laggards', UK and Canada set to soar

Agents have “all but written off” travel to Australia and New Zealand for international students for 2021, while Canada and the UK have seen more interest as study destinations in recent months, a survey has suggested.

The US is increasingly being seen as “more open and welcoming”, with 51% of the nearly 900 agents in 73 countries in the Navitas survey agreeing that its reputation had improved in the two months before March.

While agents reported that other destinations such as Singapore, the Netherlands, Germany and UAE have increased in interest in the two months up to March 2021, New Zealand and Australia have both seen declines.

Over 80% of agents indicated that Canada had seen increased interest as a study destination in the months leading up to March 2021.

The two countries are “clear laggards” in the race to recruit international students, the research suggested. And despite being ranked fairly highly for the governments’ handling of Covid-19 and having ‘safe and stable’ reputations, New Zealand and Australia have lost much of their reputations for being open and welcoming among agents, the survey revealed.

Unlike competitor countries, agents expect border closures, visa and flight unavailability, and quarantine requirements to continue in the second half of 2021, and in some instances into the beginning of 2022.

However, overall confidence that students will be able to travel in 2021 remains mixed.

While over 40% of agents expect students to be able to travel to the UK in the second half of 2021, more than half said travel to New Zealand was either ‘Unlikely’ or ‘Very unlikely’.

While upwards of 30% of agents suggested that travel was ‘almost certain’ to the USA, the Netherlands, UAE, Singapore, Canada and the UK, just 4% said the same of New Zealand and Australia. 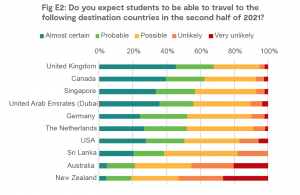 “While Canada and the UK are very well positioned, agents are by no means considering travel to those countries as a sure thing,” the report noted.

“On our assessment, the UK is looking highly prospective for a full reopening to international students in the autumn, but even in that case, many agents rate travel as only being possible (27%), unlikely (3%) or very unlikely (2%).”

The UK’s “strongest feature” is the optimism regarding the ability to travel, the report noted.

Despite Australia and New Zealand continuing to be perceived as ‘safe and stable’, the perception is “increasingly irrelevant to a country’s reputation as a study destination”, the paper suggested.

“As Covid-19 runs its course, students and agents will pay less and less attention to case counts when judging a country’s response and reputation,” it said.

“There is a clear decoupling between increasing interest in a given study destination, and the number of cases.

“While there was a weak relationship between the case counts and survey responses in Sept 2020, this relationship has more or less disappeared altogether in March 2020.”

The two countries are characterised by their hard border stance by agents, and will be “spectators, not beneficiaries”, of the recovery in global student flows in 2021, the survey suggested.

The pandemic has accelerated the rise of other international education destinations – notably Sinapore – the report found.

“Covid-19 has led to more interest in Singapore as an education destination,” it said.

Since September 2020 the proportion of agents agreeing/strongly agreeing that interest in Singapore as an education destination has risen from 41% to 52% in March 2021.

“Whether or not the current interest in Singapore will be sustained remains to be seen. Interest is particularly strong from China and South East Asia, and less so from South Asia,” the report said, as it highlighted the high number of branch campuses in the Lion City.

Canada is “poised for a potential surge” in international students in 2021, as it leads the way for both safety and openness among agents.

However, the paper noted that Canada could lose ground to the UK without introducing some sort of timeline for re-opening borders, and at the same time visa processing times “seem to indicate that Canada is not yet able to cope with the volumes of applications coming through”.

If pent-up demand results in a surge, delays will be exacerbated, the report suggested, in addition to a potential for long queues around flights and mandatory quarantine causing bottlenecks.

“If Canada doesn’t have all its ducks in a row in time for the September 2021 intake, some students may be committed enough to contemplate a start online before transitioning to face to face. But many students could also consider other study destinations, particularly the UK,” the paper noted.

The US has “had a remarkable change in fortune, and is now chasing Canada and the UK in terms of being perceived as open and welcoming”. It will reassert its status at the top destination in the coming year, the report contended.

Compared with previous rounds of surveys in May 2020 and Sept 2020, a higher percentage of agents indicated that in the two months up to March the US government’s handling of the coronavirus had made it a more attractive study destination.

The report attributed the tripling of barely 12% agreeing or strongly agreeing in September 2020 that the government’s handling of Covid-19 had improved the country’s standing to 36% in March 2021 saying the same, to the country’s “monumental” vaccination program, as well as the Biden administration adopting a “more conventional science-led” response to the pandemic.

Despite a rapid improvement in the handling of the virus, the country is “yet to close the gap” in the eyes of agents, the survey suggested.

“In reality, this improvement in [‘safe and stable’ and ‘open and welcoming’] reputation among education agents is not likely to translate into earnest recovery of the sector in the USA until September 2022,” it added.

“It will take time for the Biden administration to implement its new policies and for the visa issuance process, which is already experiencing delays due to the Covid-19 pandemic, to catch up with the increased demand for visas.”

Read More
Written by Viggo Stacey,
Source link: https://thepienews.com/news/new-zealand-and-australia-clear-laggards-in-study-destinations-race/
Previous Next
Upnext in
Disclaimer UniAgents does not author any news or content in this section. We aggregate News Headlines, Summary, and Content from over 700 sources, explicitly listed in every article/page. Users can visit the sources for full articles and more local news. The sole aim is to aggregate education news from around the world so they can be categorised and the user can have a personalised experience. In some cases, the original article has news in native language but listing on UniAgents for each article is done in English. There are no copyright infringements, as we do not claim to produce any content mentioned on this page, all relevant sources are mentioned. For any clarifications, do not hesitate to contact us.