Go Back to the List October 19, 2018
Birmingham opens door to Chinese students with gaokao

The United Kingdom’s University of Birmingham has announced that it will accept the gaokao exam for high-flying Chinese students wishing to join its undergraduate courses in 2019 in place of A-levels or the International Baccalaureate (IB).

The university says it is the first member of the Russell Group of elite research universities to have announced that it is broadening the terms of entry of Chinese students in this way. It hopes this will “further open” access to the university for students from China to take undergraduate degrees.

There are increasing examples of universities in other countries, such as the United States, Canada and Australia, accepting the gaokao, but it is not known if any other universities in the UK have done so.

High school students who complete the National Higher Education Entrance Examination or gaokao with top grades will be able to apply for direct entry onto Birmingham degree programmes without first completing a foundation year.

Gaokao is usually taken by students in their last year of senior high school and every year each province in China sets the grades required to gain admission to its universities.

University of Birmingham Vice-Chancellor Professor Sir David Eastwood said: “We are further opening access to Birmingham’s wealth of education opportunities for the brightest and most dedicated Chinese students by accepting this rigorous and important qualification. I look forward to welcoming these high-flying students to the University of Birmingham.”

A spokesperson for the University of Birmingham told University World News that before making the decision the university had taken time to review the gaokao and senior high school qualifications from China, including analysis of other universities and countries which accept the qualification for undergraduate entry.

“The University of Birmingham-Jinan University Joint Institute, which opened in September 2017, already accepts gaokao for entry to its innovative dual degree mathematics courses. Therefore, we were satisfied with the quality of students we will attract who can meet our entry requirements.”

He said: “It is difficult to predict the number of students for next year’s intake because this will be the first time we are accepting gaokao students for undergraduate entry at Birmingham, but we are aiming to recruit high-quality students who will form an integral part of our education and research community."

Currently 1,337 Chinese students are studying at undergraduate level at the University of Birmingham, making up 6% of the 21,948 total undergraduate population.

Eastwood said the university has been “challenging and developing great minds for more than a century”.

“We welcome people from around the globe to study at Birmingham and Chinese students form an integral part of our education and research community.”

The annual gaokao examination is usually held across China in early June. Students are tested in Chinese, mathematics and a foreign language – usually English. They also have to choose between testing in social sciences or natural sciences in most regions.

Exam results are usually published towards the end of June and each province will have their own list of minimum gaokao grades for entry into Tier 1, Tier 2 and Tier 3 universities in China.

Gaokao is increasingly accepted by universities in Australia, the US, Canada and mainland Europe. Birmingham will only be considering high quality students who achieve a minimum 80% gaokao score and meet additional academic and English language requirements.

China’s official newspaper, Global Times, reported in July that the University of New Hampshire was the first public university in the US to accept the gaokao, following in the footsteps of several private universities; while about 30 universities in Canada allowed it to be used in place of the SAT or similar tests. The University of Sydney in Australia had been the first to accept it, though, in 2012.

In many cases, however, the universities also required evidence of English language competence and extra-curricular activities, the Global Times reported.

A spokeswoman for the University of Sydney told University World News it implemented direct admission based on Tier 1 results in the National Higher Education Entrance Examination (gaokao) in recognition of the strength of the Chinese secondary education system, as have most other Australian universities now and it is one of the factors in the growth of demand from China.

“We accept a diverse range of secondary qualifications completed in China at a high standard, provided students also meet our English language and special entry requirements,” she said. “These include the Higher School Certificate, A Level, International Baccalaureate and Victorian Certificate of Education – as well as through our University Direct Entry Course, in line with most other universities in Australia and overseas.

She added: “A range of factors contribute to the strong growth in demand by high quality students from China that we’ve experienced in recent years, such as our continuing success in international rankings, increasing global mobility and our early decision to recognise the gaokao.”

“I am delighted that the university is now accepting the gaokao. This gives the brightest and best Chinese students an opportunity to move straight into the first year of our undergraduate programmes and experience the benefits of studying at a global top 100 university such as Birmingham.”

The history of collaboration between China and the University of Birmingham dates back almost to the foundation of the university in 1901. The university’s China Institute was created in 2012 to reflect the extensive academic activities its colleagues undertake in China. 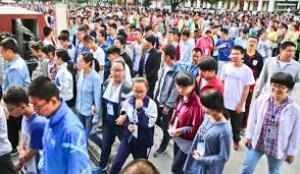 Read More
Written by Brendan Oâ€™Malley,
Source link: http://www.universityworldnews.com/article.php?story=20181018141812529
Previous Next
Upnext in
Disclaimer UniAgents does not author any news or content in this section. We aggregate News Headlines, Summary, and Content from over 700 sources, explicitly listed in every article/page. Users can visit the sources for full articles and more local news. The sole aim is to aggregate education news from around the world so they can be categorised and the user can have a personalised experience. In some cases, the original article has news in native language but listing on UniAgents for each article is done in English. There are no copyright infringements, as we do not claim to produce any content mentioned on this page, all relevant sources are mentioned. For any clarifications, do not hesitate to contact us.