Go Back to the List May 28, 2021
Indian students enrolled in Canada stranded, seek priority vaccination

As Canada is expected to allow fully immunised travellers, many students say the vaccine shortage for the 18-45 age group may hamper their plans to return. Covaxin, one of the first two shots approved in India, is yet to receive a WHO approval

Thousands of Indian students enrolled in Canadian universities have been stuck in India since Canada suspended the flights from India in late April. “Some of the students were able to go... but many have been stuck here due to unavailability of flights and the visa delays...,” said Deepa Bhatia, a parent of a student.

In February, when Canada placed restrictions on travellers, most Indian students found it difficult to pay 2,000 Canadian dollars ( â‚¹12,00,00) for a mandatory hotel quarantine upon arrival.

“With halted flights, it seems [students will be unable to return] till the end of June. Many... were supposed to get there for summer courses...,” Bhatia said.

Students say universities even continue to charge the fee for unoccupied hostels apart from the course fee. “My daughter is a science student, and she was enrolled for an in-person course which involved some laboratory work. However, due to the unavailability of the flights, she missed it. However, we have paid for it and there is no return of that fee,” said Preeti Sukumar, a resident of Bengaluru. She added her daughter continues to pay her hostel fee. “The rent for each month is over 1,000 Canadian dollars. While I am managing it somehow, many parents have lost their jobs in the second wave of the virus in India. They are struggling to manage the normal academic fees, leave alone the hostel fee,” said Sukumar. 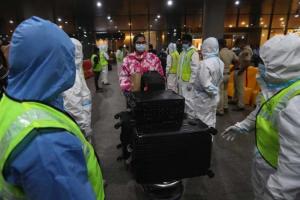 Read More
Written by By Umar Sofi,
Source link: https://www.hindustantimes.com/education/admissions/indian-students-enrolled-in-canada-stranded-seek-prioritised-vaccination-101622178491896.html
Previous Next
Upnext in
Disclaimer UniAgents does not author any news or content in this section. We aggregate News Headlines, Summary, and Content from over 700 sources, explicitly listed in every article/page. Users can visit the sources for full articles and more local news. The sole aim is to aggregate education news from around the world so they can be categorised and the user can have a personalised experience. In some cases, the original article has news in native language but listing on UniAgents for each article is done in English. There are no copyright infringements, as we do not claim to produce any content mentioned on this page, all relevant sources are mentioned. For any clarifications, do not hesitate to contact us.