What does Budget 2019 mean for Irish higher education? So far, the reaction has not exactly been welcoming.

Ireland’s representatives of students and universities have not held back in their displeasure with news of what the country’s third-level institutions have been allocated as part of Budget 2019.

In his speech to the Dáil, Minister for Finance Paschal Donohoe, TD, said that the Government will allocate a total of €10.8bn to the Department of Education and Skills, with €150m being allocated to higher education for the year.

The Government said 2019’s allocation will support 3,500 additional undergraduate places and also announced the creation of a ring-fenced Human Capital Initiative worth €300m between 2020 and 2024 for increased investment in higher education courses.

We are planning for the future – this year we have highest ever capital investment- €941m #Budget19
Education is key to our ability to adapt successfully during a period of very rapid change and considerable new challenges. This Budget is making the investments we need to ensure we equip Irish talent with the capacity to shape their future #Budget19

Overall, it represents a 6.7pc increase on 2018, including funding of €66m to meet changing demographics, allowing for 1,300 additional posts in schools next year.

“Education offers an important avenue to enhanced living standards, delivering benefits for individuals and for society,” the Minister said. “Uncertainty around Brexit and other risks to the economy underscore the need for us to continue to invest in our people.”

Responding to the news, the Irish Universities Association (IUA) said that this only equates to €57m in extra funding when taking into account existing commitments on national pay increases. As this is ring-fenced, the IUA added, it won’t be able to deal with the core funding gap found within Irish higher education.
Way behind Europe
Speaking with Siliconrepublic.com, the IUA’s director general, Jim Miley, said: “We don’t have a burning house in third level in Ireland, but we can smell the smoke.

“The indications of that are a drop in international [university] rankings and serious pressure in facilities right across the system.”

He added: “It’s patent nonsense for the Minister to continue to talk about having the ‘best education system in Europe by 2026’ while presiding over a funding regime that only provides a fraction of the funding per student of those best countries in Europe.” He pointed to estimates that show that State funding equates to approximately €5,000 per student, compared with around €20,000 in Finland and Sweden.

Another organisation highly critical of the allocation is the Union of Students in Ireland (USI), whose president, Síona Cahill, said that the allocation was “grossly inadequate”. She continued: “I’m gravely concerned about the lack of investment in what is the future of our economy as well as of our society. I’m very, very worried about it.”

A discussion document that never really got discussed’
Cahill went on to highlight that the amount is nowhere near the recommended funding allocation published as part of the Cassells report, a Government document commissioned to investigate how much funding would be needed to run an efficient third-level education system.

Published more than two years ago, the report called for €600m in additional funding each year to cover costs over a period of five years, expanded to €1bn by 2030.

This, it said, would allow for “an improvement in student:staff ratios, better engagement with students, and improved support services for teachers and students”.

Cahill said: “The [Cassells report] was a discussion document that never really got discussed. Student loans are clearly not the answer, but public investment is needed and it hasn’t been made by the Government.”

At a demonstration outside of Dáil Éireann this morning (9 October), Cahill and the USI called for a greater allocation of funds to increase the amount given as part of the Student Universal Support Ireland (SUSI) grant, and greater access to affordable accommodation.

At the time, Cahill was quoted as saying: “The Government has a choice to make in this Budget: they can either squirrel away public money for the benefit of those in power, or they can invest in the future of their people.” 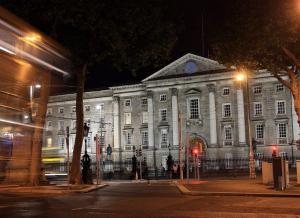 Read More
Written by colm gorey,
Source link: https://www.siliconrepublic.com/innovation/budget-2019-higher-education
Previous Next
Upnext in
Disclaimer UniAgents does not author any news or content in this section. We aggregate News Headlines, Summary, and Content from over 700 sources, explicitly listed in every article/page. Users can visit the sources for full articles and more local news. The sole aim is to aggregate education news from around the world so they can be categorised and the user can have a personalised experience. In some cases, the original article has news in native language but listing on UniAgents for each article is done in English. There are no copyright infringements, as we do not claim to produce any content mentioned on this page, all relevant sources are mentioned. For any clarifications, do not hesitate to contact us.