Go Back to the List August 31, 2018
Moscow State University Ranked Top in Eurasia

Moscow State University (MSU) has been named the best university in Eurasia by the Times Higher Education magazine, with two other Russian institutions following close behind.

MSU received the highest ranking for “its teaching environment, its research environment and its international outlook,” the magazine said on Thursday.

Schools from 16 countries were eligible to make the list, but Russian, Iranian and Turkish universities scored nearly all 50 of the top spots on the table.

Belarussian State University and the National University of Kiev ranked 44th and 49th.

The list was published alongside a Eurasian research forum the magazine is holding this week with Russia’s Kazan Federal University.

MSU placed 194th in the Times Higher Education’s World University Rankings and 33rd in its World Reputation Rankings this year. 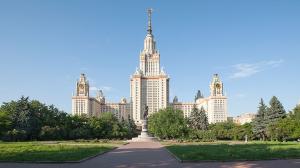 Read More
Written by Nickolas Titkov / Flickr ,
Source link: https://themoscowtimes.com/news/moscow-state-university-ranked-top-in-eurasia-62733 | https://themoscowtimes.com/news/moscow-state-university-ranked-top-in-eurasia-62733
Previous Next
Upnext in
Disclaimer UniAgents does not author any news or content in this section. We aggregate News Headlines, Summary, and Content from over 700 sources, explicitly listed in every article/page. Users can visit the sources for full articles and more local news. The sole aim is to aggregate education news from around the world so they can be categorised and the user can have a personalised experience. In some cases, the original article has news in native language but listing on UniAgents for each article is done in English. There are no copyright infringements, as we do not claim to produce any content mentioned on this page, all relevant sources are mentioned. For any clarifications, do not hesitate to contact us.