Since the advent of private universities in Nigeria in 1999 – most of which are faith-based – there have been calls for them to reduce their fees which are several times higher than public universities. Leading these calls are those church members whose investments of time and money made possible the establishment of such institutions in the first place.

The problem is particularly acute given the fact that many religious entities in Nigeria, which collect tithes (untaxed by the government) from their members, have accumulated immense wealth in the form of property and private jets for their leaders, but such wealth is, in many cases, not being used to subsidise the costs of education.

According to Funke Adebola, an expert in religious affairs at the Civil Liberties Organisation, those who contributed in cash or kind for the creation of many of these institutions are not beneficiaries of the projects. “The children of the poor members of these churches and the mosques cannot afford the exorbitant tuition fees,” she said.

Deborah Michael, a leading member of a Pentecostal church situated on the outskirts of Lagos, told University World News that the leadership of her church appealed to members during church services for assistance in building a university where faith and education “would go hand in hand”. The university was to be open to all youth of the church who had the prerequisites to gain entrance into tertiary study in Nigeria.

She said the pastor of her church told the congregation several times that tuition fees for children of church members who had made a contribution to the institution’s establishment would be reduced.

“We believed in our church leaders. We decided to triple our tithes to realise their dreams because we want our children to be well educated and spiritually upright. I even encouraged my husband, an electronic engineer, to support this project. He grudgingly agreed to be part of this project,” she said.

However, after her daughter was admitted to Covenant University they discovered that tuition fees were four times higher than those of some public universities.

“I went to meet the pastor for more explanation and I reminded him about the promise he personally made to the congregation about subsidised tuition fees. He admitted that he made this declaration several times.

“He advised that I pay the stipulated fees first and then send a petition to the governing council of the university on this subject matter, which I did seven months ago. Up until now, there has been no response.”

Another donor is Abdulla Ismael Okonkwo, an architect with a multinational company who is also a devout Muslim. A faith-based university to cater for Muslim youth was motivated by perceptions of their being denied entry for study to the United States after the 2001 attack on the Twin Towers in New York. Okonkwo contributed to this.

According to Okonkwo, the imam of his mosque promised that he would pay lower tuition fees because of his contributions to the building of the university. However, this promise has not materialised.

Higher education officials have expressed concern over the high fees charged by private institutions. In August 2015, Professor Julius Okojie, then executive secretary of the National Universities Commission (NUC), at a presentation of operational licenses to nine private universities, said the NUC had appealed to the operators of these institutions not to charge fees beyond the reach of Nigerians.

“We advised them not to charge astronomical fees. The issue of tuition fees in private universities is dictated by market demand, quality and facilities therein. It is a market and demand situation,” he said. But he warned: “If fees scare the students away, it affects the institution.”

While some institutions have heeded the call and have reduced fees for children of elite members, many congregants and other stakeholders, such as Dr Stella Nwankwo, coordinator of the Institute for Religions and Interdenominational Dialogue, feel they have not gone far enough, particularly given the lavish lifestyle led by many of the religious leaders.

“The lifestyle of these religious leaders is highly subsidised by the revenues of these churches and mosques. Some of them own jets. The accounts of these organisations are not audited,” said Nwankwo.

It was only in 2015, for the first time in Nigeria, that the federal Financial Reporting Council was mandated to audit the financial workings of these organisations.

"Despite this reform, we still witness these leaders with jets, living in plush homes and riding in the latest armoured cars. They dogmatically refused to subsidise tuition in these tertiary institutions. There is a misplaced priority within the leadership of these organisations,” said Nwankwo.

According to information available online, private university fees, depending on the course and year, range from NGN500,000 (US$1,380) per year to as much as NGN3 million (US$8,250) per year in the case of the American University of Nigeria, Yola. Covenant University charges NGN432,000 (US$1,200) per year.

In defence of high fees

“The Anglican Church owns the school, but the Anglican Church does not fund it. We fund it through the fees we charge students. We are one of the lowest charging private universities in Nigeria. There is nothing like over-charging. As far as we are concerned, we have allowed Anglicans to be given a 10% rebate in their fees. We also allow everybody, whether you are Anglican or not, to pay their fees in three equal instalments.”

Asaju also highlighted the fact that private institutions receive no government subsidy. “We have no grant from government, no access to Tertiary Education Trust Fund (TETFUND), not benefiting anything from government, yet we in the private sector fund the TETFUND that they use to fund the other universities. It’s exploitative,” he said.

Bishop David Oyedepo, founder of Covenant University, has publicly defended the tuition fees charged by his institution. In a statement in a telecast in preparation for the Shiloh 2016 Convention, he said the fees had “God's approval” and he warned critics of the fees to desist to avoid incurring the wrath of God.

Given the persistence of the economic recession in Nigeria, the debate over tuition fees in private tertiary institutions is not likely to fall away and these institutions are increasingly likely to be faced with the following dilemma: reduce fees or students will vote with their feet. 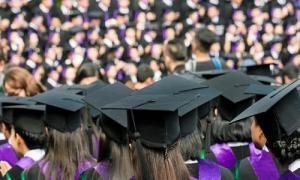 Read More
Written by Tunde Fatunde,
Source link: http://www.universityworldnews.com/article.php?story=20180921104814443 | https://www.google.co.in/search?q=%E2%80%98Misled%E2%80%99+parents+call+for+lower+private+university+fees&rlz=1C1CHBF_enIN790IN790&source=lnms&tbm=isch&sa=X&ved=0ahUKEwjH5_jO6d3dAhWabn0KHWu_CsUQ_AUIDygC&biw=1517&bih=730#imgrc=6WZDOMi_pqjFSM:
Previous Next
Upnext in
Disclaimer UniAgents does not author any news or content in this section. We aggregate News Headlines, Summary, and Content from over 700 sources, explicitly listed in every article/page. Users can visit the sources for full articles and more local news. The sole aim is to aggregate education news from around the world so they can be categorised and the user can have a personalised experience. In some cases, the original article has news in native language but listing on UniAgents for each article is done in English. There are no copyright infringements, as we do not claim to produce any content mentioned on this page, all relevant sources are mentioned. For any clarifications, do not hesitate to contact us.