Go Back to the List October 04, 2018
Universities are admitting students whose A-level results are up to five grades below offer, head warns

Universities are admitting students whose A-level results are up to five grades below their original offer, a leading headmaster has warned. Chris Ramsey, head of the £37,860-a-year Whitgift School in south London, said that Russell Group institutions are increasingly giving places to 18-year-olds regardless of whether they meet their offers or not. Mr Ramsey, who chairs the universities committee at the Headmasters' and Headmistress' Conference (HMC), said that there is growing concern among schools about the practise. "The biggest gap at my schools was five grades down from the offer admitted," he told headteachers at the annual HMC conference in Manchester. "We had plenty of fives across HMC schools, fours were commonplace, threes, twos." He said that in the past two to three years, there has been an increase in the number of students being accepted to their universities of choice despite missing their offer. Mr Ramsey said that if this pattern continues, university offers risk losing their integrity as word spreads among pupils that they do not really need to meet their offers as they may well be given a place either way.

The trend comes amid fierce competition among universities to attract students, even if it means disregarding their usual entry requirements. The lifting of student number controls in England in 2015 gave universities free rein to recruit as many undergraduates as they see fit - but the move has led to accusations that they now act like businesses, seeking to maximise their revenue by recruiting as many students as possible. A dip in the population of 18-year-olds in recent years has also heightened competition between universities. " There were significant rises in university offers a few years ago, and schools responded by predicting in some cases ambitiously, though always realistically," Mr Ramsey said. "However, there is the potential for an unhelpful vicious circle if universities think schools will over predict and ‘control’ for that by setting offers higher than they need to. "The reality is that in the last three years, and particularly this last year, many candidates have gained entry to their chosen universities with grades lower than those required." Universities have also been giving out rising numbers of unconditional offers. In the past year alone, there has been a 32 per cent rise the unconditional offers, according to new figures released by Ucas, the university admissions service. Dame Janet Beers, who is vice Chancellor at Liverpool University and President of Universities UK, told heads that she not in favour of them. "We don't use unconditional offers," she said. "This is partly because I'm in charge and I don't agree with them." 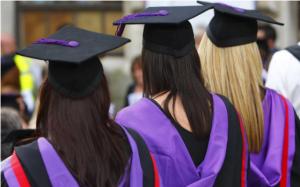 Read More
Written by Camilla Turner,
Source link: https://www.telegraph.co.uk/education/2018/10/04/universities-admitting-students-whose-a-level-results-five-grades/ | https://www.telegraph.co.uk/education/2018/10/04/universities-admitting-students-whose-a-level-results-five-grades/
Previous Next
Upnext in
Disclaimer UniAgents does not author any news or content in this section. We aggregate News Headlines, Summary, and Content from over 700 sources, explicitly listed in every article/page. Users can visit the sources for full articles and more local news. The sole aim is to aggregate education news from around the world so they can be categorised and the user can have a personalised experience. In some cases, the original article has news in native language but listing on UniAgents for each article is done in English. There are no copyright infringements, as we do not claim to produce any content mentioned on this page, all relevant sources are mentioned. For any clarifications, do not hesitate to contact us.