Go Back to the List September 27, 2018
Education in Iraq is in crisis. UK universities can help

Four decades of wars, sanctions, dictatorship, invasion and instability have seen Iraq slide into a 21st-century dystopia. Once the “cradle of civilisation”, it now lurches between chaos and catastrophe. Most recently, citizens in the south have been railing against state failures in sometimes violent protests. If provision of basic services such as potable water and electricity is unreliable, what hope is there for higher education? A number of Iraqi academics, students and professionals say they urgently need modernised materials and methods for learning and teaching. Equally, many Iraqi academics worry about political interference in the sector, regarding it as a further barrier to development. This is because services such as public higher education are administered by government and subject to the unpopular muhasasa, or patronage system, which is susceptible to corruption and thus limits capacity for reform.

In 2017, I asked Iraqis how they view international collaboration with UK universities given the dire political interventions of the past, to which 70% said they were strongly in favour of cooperation. The United Nations University estimates that 84% of universities were “burnt, looted or destroyed” during the 2003 invasion of Iraq. That destruction has been followed by further damage from the war with Islamic State. When militants swept across north western Iraq in 2014, at least 10 universities were said to have been destroyed, displacing students and academics. Subsequently, two-thirds of displaced children missed two years of formal education, with repercussions for higher education in years to come. Advertisement Higher education is essential for innovation and scholarship, which Iraq needs in order to create knowledge and prosperity. But Iraqi children, who represent almost 50% of the 39 million population, are losing out. The International Crisis Group explains how Iraq’s children, “Generation 2000”, are a transnational challenge; the high unemployment they face pushes them towards migrating or joining a militia for survival. In 2017, Oxfam issued a warning about the long-term consequences for a generation of Iraqis who came of age during war. This is where UK universities can come in. Some already have: professor Eleanor Robson at University College London leads the multi-institutional Nahrein Network, which facilitates the “sustainable development of antiquity, cultural heritage and the humanities in Iraq and its neighbours”. Equally, the University of Northampton has successfully partnered with the University of Babylon since 2012. This has expanded from a computing and nursing programme to include research, joint PhD supervision and staff development, and a franchise is now underway. There are domestic reasons for reaching out, too. Internationalisation in higher education is an important policy area for most universities. Campaigns such as #weareinternational underscore our commitment to global scholarship and knowledge exchange. There are other potential benefits to partnering: Iraq’s population is youthful, ours is ageing. How this is done is critical – meaningful partnerships are different to interfering. Decolonising approaches are an opportunity to break with oppressive mindsets and hierarchies. Sensitivity is important; Iraqi students appreciate, in my experience, recognition of their particular circumstances and the signs of PTSD. Several Iraqi academics and students I spoke to want us to support them in areas they find themselves lacking, from safety and stability to materials and equipment. Many express a strong desire for modern, practical approaches to higher education focused around workplace skills and employability. Forging robust quality assurance criteria has been a priority for some time. One Iraqi I interviewed bemoaned the prospects for higher education in their country after Isis. But this is one unknown aspect of Iraq’s future that we might be able to positively influence. 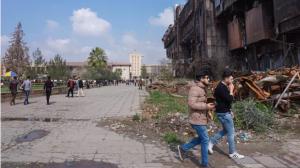 Read More
Written by Fran Sutherland,
Source link: https://www.theguardian.com/education/2018/sep/27/education-in-iraq-is-in-crisis-uk-universities-can-help | https://www.theguardian.com/education/2018/sep/27/education-in-iraq-is-in-crisis-uk-universities-can-help
Previous Next
Upnext in
Disclaimer UniAgents does not author any news or content in this section. We aggregate News Headlines, Summary, and Content from over 700 sources, explicitly listed in every article/page. Users can visit the sources for full articles and more local news. The sole aim is to aggregate education news from around the world so they can be categorised and the user can have a personalised experience. In some cases, the original article has news in native language but listing on UniAgents for each article is done in English. There are no copyright infringements, as we do not claim to produce any content mentioned on this page, all relevant sources are mentioned. For any clarifications, do not hesitate to contact us.