Go Back to the List February 24, 2019
Egypt to Construct 8 International Universities

Egypt’s government will construct eight international universities in the New Administrative Capital by 2020, Minister of Higher Education and Scientific Research Khaled Abdel Ghaffar announced during his visit to the University of Canada in Egypt (UCE) on Sunday.
President of the UCE, Debbie MacLellan, and Chief of the Engineering Authority of the Armed Forces Kamel Waziri accompanied Abdel Ghafar during his inspection of the university’s course of study, which will serve as a likely model for the future universities.

Abdel Ghaffar said that “I am assured of the quality of the educational process in the UCE. The Curricula to which these students are studying in the UCE will prove necessary for Egypt during the coming period.”
During a meeting with Abdel Ghaffar, faculty members at the UCE said that the study performance of the Egyptian students was equal to their Canadian counterparts, thanks to the high quality of education in the UCE.
The university currently hosts the branch campuses of the University of Prince Edward Island (UPEI) and Memorial University of Newfoundland (MUN). Each of the top-ranked programs that these universities offer through the University of Canada branch campus in Egypt is identical to the program they offer to Canadian students in Canada.
At the end of their program students studying at one of the branch campuses hosted by University of Canada in Egypt will be granted exactly the same degree as students studying in Canada. 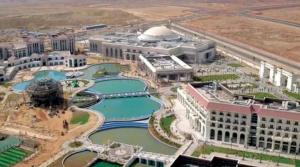 Read More
Written by MENA,
Source link: https://ww.egyptindependent.com/egypt-to-construct-8-international-universities-in-new-administrative-capital-by-2020/ | https://www.google.com/search?q=Egypt+to+construct+8+international+universities+in+New+Administrative+Capital+by+2020&rlz=1C1CHBD_enIN817IN817&source=lnms&tbm=isch&sa=X&ved=0ahUKEwi0gqXs7L_hAhVT_XMBHdhSAlwQ_AUIDygC&biw=1360&bih=608#imgrc=RT4sK3L9qIqyYM:
Previous Next
Upnext in
Disclaimer UniAgents does not author any news or content in this section. We aggregate News Headlines, Summary, and Content from over 700 sources, explicitly listed in every article/page. Users can visit the sources for full articles and more local news. The sole aim is to aggregate education news from around the world so they can be categorised and the user can have a personalised experience. In some cases, the original article has news in native language but listing on UniAgents for each article is done in English. There are no copyright infringements, as we do not claim to produce any content mentioned on this page, all relevant sources are mentioned. For any clarifications, do not hesitate to contact us.