Go Back to the List January 21, 2019
Trump proposes deal to help students in exchange for wall (Trump Proposes DACA Deal for a Wall)

Speaker of the House Nancy Pelosi described Trump's plan to reopen the government as a "nonstarter," saying it does not provide permanent solution for young immigrants who are protected by the Deferred Action for Childhood Arrivals program.

President Trump on Saturday proposed temporarily extending protections against deportation for certain young immigrants in exchange for $5.7 billion funding for a wall along the southern border.

Trump, who has not budged from his position that any deal to reopen the federal government must include funding for the wall, proposed in exchange for wall funding a three-year extension of protections for beneficiaries of the Deferred Action for Childhood Arrivals program, a program established by President Obama that provides protections against deportation and temporary work permits to more than 700,000 young immigrants, many of them current or former college students, who were brought to the U.S. without documentation as children.

Trump, who described his plan to end the partial government shutdown as "a commonsense compromise both parties should embrace," also proposed a three-year extension of protections for immigrants who have an immigration classification known as temporary protected status due to armed conflict or an environmental disaster in their home countries.

Democrats, who have maintained that Trump must reopen the government before they will negotiate on border security, seemed unreceptive to his proposal. Speaker of the House Nancy Pelosi described his plan as a “non-starter.”

"It is unlikely that any one of these provisions alone would pass the House, and taken together, they are a non-starter," Pelosi said in a statement issued in advance of the president’s address. "For one thing, this proposal does not include the permanent solution for the Dreamers [as DACA participants are known] and TPS recipients that our country needs and supports."

Trump moved to end the DACA program in September 2017, holding that the program represented an unconstitutional overreach by Obama of his executive authority. Multiple courts have blocked the Trump administration from ending the program as planned, and protections remain in place for current DACA holders.

The Associated Press reported that the Supreme Court took no action Friday on the Trump administration’s appeal that it rule this spring on the lawfulness of its decision to end DACA, raising the prospect that the court will not hear the case this term and the program will be kept in place for at least another year. The National Immigration Law Center cautioned, however, that it is too early to know whether the court will take up the DACA case this term and that if the court did make any decisions on Friday it expects to learn of the outcome Tuesday morning.
Many college leaders and higher education groups have lobbied for a permanent solution for DACA recipients, saying that the students with DACA status contribute to their communities and economies and that this cohort of American-educated students provides a critical source of talent for the U.S. 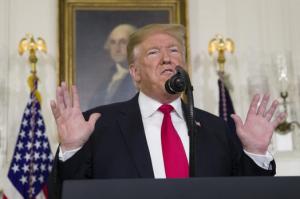 Read More
Written by Elizabeth Redden,
Source link: www.insidehighered.com/news/2019/01/21/trump-offers-three-years-daca-exchange-wall-funding
Previous Next
Upnext in
Disclaimer UniAgents does not author any news or content in this section. We aggregate News Headlines, Summary, and Content from over 700 sources, explicitly listed in every article/page. Users can visit the sources for full articles and more local news. The sole aim is to aggregate education news from around the world so they can be categorised and the user can have a personalised experience. In some cases, the original article has news in native language but listing on UniAgents for each article is done in English. There are no copyright infringements, as we do not claim to produce any content mentioned on this page, all relevant sources are mentioned. For any clarifications, do not hesitate to contact us.