Go Back to the List May 09, 2020
Scott Morrison opens the door for international students to return to Australia

International students could be allowed back into Australia as early as July with the federal government confirming it will consider an exemption to the travel ban.

The federal government has confirmed it will consider exempting international students from Australia's travel ban as early as July.

Prime Minister Scott Morrison revealed a national three-stage framework out of coronavirus restrictions on Friday that opened the door for overseas-based students to return to Australian universities.

While specifics around the exemption have not been outlined, Mr Morrison said it would only be done if strict quarantine restrictions were met.

"Issues of international students, you'll note that it does come into the third step of the plan, that is a possibility," he said.

"We are open to that, and we would be working with institutions to see how that could be achieved.

"But it must be done according to those strict quarantine restrictions and how that's done, and how those costs are met."

At least 10 per cent of international students enrolled at Australian institutions are stuck overseas with the industry worth $40 billion a year to the economy.

Australian universities are expected to record large losses as a result of forced campus closures and border restrictions.

"Clearly without any international students coming into the country, Australia's fourth-biggest industry is in a major crisis," International Education Association of Australia CEO Phil Honeywood said.

National COVID-19 Coordination Commission Chair Nev Power stressed the importance of rebooting education as quickly as possible and suggested the possibility of university-funded charter flights to bring overseas students back to Australia.

"There is an opportunity for the universities to work with the government to provide safe processes ... expedite those visas, get those international students back here as quick as possible," Mr Power told the Australian Financial Review.

"We'll need to put quarantine provisions in. We'll need to make sure that unis are reconfigured to incorporate safe practices. But that way we can accelerate that because right now, this academic year, you could have them back."

However, the uncertainty faced by international students has left many considering if it is worth committing to another semester in Australia.

Belle Lim of the Council of International Students Australia said some students were choosing to defer their studies.

"The next semester is starting soon, some of them have received a conditional offer but they don't know if they should take it," she said.

"They don't know if they can come back to Australia in time."

The peak body for Australian universities insists any rush for a return to face-to-face teaching will need to meet strict medical guidelines.

"The health of our student and staff body is always the number one priority," Universities Australia CEO Catriona Jackson said.

"None of this happens if we don't get the OK to do so from health authorities." 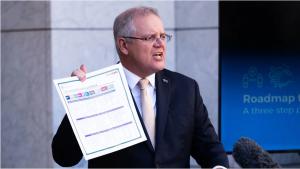 Read More
Written by NICK HOUGHTON, ABBY DINHAM,
Source link: https://www.sbs.com.au/news/scott-morrison-opens-the-door-for-international-students-to-return-to-australia?cid=news:socialshare:facebook | https://www.sbs.com.au/news/scott-morrison-opens-the-door-for-international-students-to-return-to-australia?cid=news:socialshare:facebook
Previous Next
Upnext in
Disclaimer UniAgents does not author any news or content in this section. We aggregate News Headlines, Summary, and Content from over 700 sources, explicitly listed in every article/page. Users can visit the sources for full articles and more local news. The sole aim is to aggregate education news from around the world so they can be categorised and the user can have a personalised experience. In some cases, the original article has news in native language but listing on UniAgents for each article is done in English. There are no copyright infringements, as we do not claim to produce any content mentioned on this page, all relevant sources are mentioned. For any clarifications, do not hesitate to contact us.