Go Back to the List May 09, 2021
We are all marking late at night : teachers on Englands new grading system

Five teachers shared their views about the new system, from how it has affected their workload to the potential impact on their students’ grades.

For Emily Gildea, an English teacher and deputy head at a Cambridgeshire secondary school, the new grading system has brought extra pressure. “Usually, while marking GCSE practice papers, I wouldn’t be too worried about the marks I’m giving; I’d be thinking more about what pupils need to do to improve,” she said.

“But now you’re second-guessing yourself. We’re all marking through weekends and late at night. It’s the added stress of knowing how important it is to get the marking right.”

To make sure pupils’ grades are as fair as possible, Gildea consults with colleagues in her department and teachers from other schools. “The exam boards won’t supply grade boundaries for these papers, so we are still having to make our own judgments on this,” she said, adding: “The quality assurance and appeals process could come down on us if we get it wrong.”

‘Building a house on shifting foundations’

Like Gildea, other teachers who contacted the Guardian via a callout said exam boards had only recently supplied them with suggested test questions. They added that many examples had already been published and used before.

“Any teacher, or well-run department, would have already used those questions,” said Thomas, sixth form subject leader in the north-west.

“Detailed guidance [on conducting the assessments] was not published until the week before Easter. For a lot of institutions, this was during the Easter holidays. Students needed some direction on how they were going to be graded [before that].”

Thomas said updates from the exam boards had been a “constant drip feed of changing policies and requirements”, which was “exasperating and exhausting”.

“There are so many documents and blogposts that are coming from different sources – the JCQ [Joint Council for Qualifications], Ofqual and individual exam boards – all detailing additional requirements, with short deadlines, being published almost daily now,” he added.

“I now feel sick every time I see a new document from the JCQ or Ofqual, because I know that it’ll mean more work for my team, who are already on their knees. It’s like building a house on shifting foundations.”

‘There does not appear to be any consistency’

Sian Morgan, a specialist teacher in south Wales who works in two schools supporting children with special educational needs, is likewise concerned about inconsistencies within the new grading system.

“I can see variation in the way students are being prepared for exams. This is not just between schools but within schools. Some students are being told what topics to revise, while others are told to revise everything they have studied for the past two years,” said Morgan, echoing concerns raised last month by MPs on the education committee about a lack of standardisation across schools. “There does not appear to be any consistency.”

‘Our students are missing experience, teaching and time’

Alongside concerns about discrepancies in assessment styles, schools have also been affected differently by coronavirus itself, meaning some pupils have lost significantly more learning time than others.

In Yorkshire, deputy head Mark said roughly one in 11 children had been bereaved by coronavirus. Due to repeated isolations, he estimates that year 11 students have lost 8,692 days of face-to-face learning this academic year alone, about 55 days each. The school itself has recorded around 100 positive cases in pupils and staff over the same period.

The school also has high rates of deprivation among pupils, with many students lacking access to devices for remote learning and a quiet room at home for studying. Mark said he feared these factors would disproportionately impact his pupils’ results. “We have siblings sharing bedrooms with three or four others and had to provide hundreds of devices ourselves,” he said. “To develop skills you need to practise and our students are missing that experience, teaching and time.”

Mark said he believed assessments needed to take account of the pandemic’s impact on children’s learning. “We’ll follow the guidance this year but our students will obtain lower grades than they would have in normal circumstances. The comparisons with students in leafy suburb schools where the difference in pandemic experience has been stark are there to be made.”

But some teachers felt the system may actually give a fairer reflection of their students’ ability.

Laura, an assistant principal at a secondary school in the south-west, described this year’s assessment system as “rounded”. Allowing open book exams would help compensate for the months of missed in-person learning as a result of the pandemic, testing them less on their ability to cram from a year of disrupted teaching and more on their grasp of information.

“My students feel like they have more chances,” she said. “It’s not just how they’ve done in the final exam. When they have missed around seven months of face-to-face teaching and are having increased issues with mental health, this more flexible system of grading feels much fairer and less stressful.”

A spokesperson for the JCQ said it applauded the incredible effort teachers have made in supporting students and their families during the pandemic. “Guidance from JCQ and the exam boards has been, and continues to be, developed to minimise additional burden on them, and made available at the earliest opportunity.”

A spokesperson for the exam regulator Ofqual said: “We are confident that teacher-assessed grades are the fairest way to award results in these challenging times. Exam boards are supporting schools to make sure that their approach to grading is consistent, and there are quality assurance arrangements in place.” 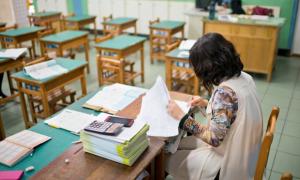 Read More
Written by Molly Blackall and Alfie Packham,
Source link: https://www.theguardian.com/education/2021/may/09/marking-late-at-night-teachers-on-england-new-grading-system
Previous Next
Upnext in
Disclaimer UniAgents does not author any news or content in this section. We aggregate News Headlines, Summary, and Content from over 700 sources, explicitly listed in every article/page. Users can visit the sources for full articles and more local news. The sole aim is to aggregate education news from around the world so they can be categorised and the user can have a personalised experience. In some cases, the original article has news in native language but listing on UniAgents for each article is done in English. There are no copyright infringements, as we do not claim to produce any content mentioned on this page, all relevant sources are mentioned. For any clarifications, do not hesitate to contact us.