Oxford University spends more than £100,000 for each additional student from a poor background it admits every year, according to a new analysis of its efforts to improve access.

Figures published in Prospect show that Oxford’s “cost of acquisition” for every extra student from a low-income area admitted since 2009 is £108,000. The data is based on Oxford’s record of admitting about 10 extra students from low-income postcodes each year between 2009 and 2016, spending at least £14m a year on access and widening participation as required by higher education regulators.

About 5,000 school-leavers in the two most disadvantaged postcode categories attain A-level grades that would qualify them for Oxbridge, but Oxford admitted only 220 such students in 2015-16.

Writing in Prospect, Alan Rusbridger, the former Guardian editor who is now principal of Lady Margaret Hall, lays bare the ongoing debate within Oxford over its admissions policies.

The university faces ongoing criticism for its over-representation of students from private schools and wealthy families, as well as its uneven record in admitting UK students from black and other minority ethnic backgrounds.

Oxford’s official aspiration is to increase the proportion of students from deprived areas to 9.5% of its UK undergraduate admissions by 2019-20 – which translates to 23 additional students.

“Oxford is undeniably missing out on talent. It rightly wants to recruit ‘the best’ but it is struggling to find them all – unless you believe ‘the best’ uniquely reside within the top 20% band of the socio-economically better off,” Rusbridger writes.

“Twenty-three works out at less than one per college. To Oxford this is ‘challenging’,” Rusbridger says. In comparison, 38 pupils at St Paul’s, an independent boys school in London, received offers from Oxford last year.

The £108,000 per extra student is calculated using the proportion spent on outreach activities and staff, and then dividing it by the number of extra students recruited per year. However, Oxford’s access work also includes several other targets. Not all the £14m-a-year figure goes on recruiting students, with some spent on bursaries for those admitted.

“Presenting this spending simply as a cost per additional widening-participation student admitted to Oxford doesn’t reflect everything it achieves.”

Ken MacDonald, the former director of public prosecutions who is warden of Wadham College, is quoted as supporting contextual admissions, which would vary entry requirements according to a student’s circumstances.

“We have to recognise that people in failing schools with difficult socio-economic backgrounds who get themselves in a position to make a competitive application have achieved something extraordinary,” MacDonald said.

“I mean, someone who’s got an A and two Bs from a crap comprehensive in Hull is quite capable of being as clever, if not cleverer, than someone who got three A*s at Westminster.”

Part of the blame for the continued reliance on independent schools is competition caused by the university’s informal league table, known as the Norrington table, which ranks colleges by degree results.

A new league table devised by Oxford’s student union ranks colleges by the proportion of pupils admitted from disadvantaged postcodes – and shows no conflict between diversity and academic performance. Traditional academic powerhouses such as Merton, St John’s and Balliol are in the top 10 for degree results and disadvantage.

In an effort to speed up change, some college leaders and senior academics – including Prof Maggie Snowling, the president of St John’s College – are open to greater centralisation of admissions, which happens in Oxford’s medical school and in postgraduate admissions.

But centralised admissions would threaten centuries of college autonomy and encounter stiff resistance. Prospect quotes one veteran college head as saying: “I have tried to propose a more centralised system and I have got no particular traction over several years.” 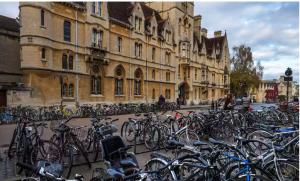 Read More
Written by Richard Adams,
Source link: https://www.theguardian.com/education/2018/sep/19/oxford-spends-108000-to-recruit-each-extra-low-income-student
Previous Next
Upnext in
Disclaimer UniAgents does not author any news or content in this section. We aggregate News Headlines, Summary, and Content from over 700 sources, explicitly listed in every article/page. Users can visit the sources for full articles and more local news. The sole aim is to aggregate education news from around the world so they can be categorised and the user can have a personalised experience. In some cases, the original article has news in native language but listing on UniAgents for each article is done in English. There are no copyright infringements, as we do not claim to produce any content mentioned on this page, all relevant sources are mentioned. For any clarifications, do not hesitate to contact us.