Go Back to the List December 09, 2018
Scotlandâ€™s universities â€˜remain open to EU studentsâ€™

Education leaders are heading to Brussels to say Scotland’s universities remain open and welcoming despite Brexit.

The delegation, led by Education Minister Richard Lochhead, will make clear its message that Scotland will continue to welcome EU citizens to study or work at its universities.

“The message we are taking is simple: Scotland’s universities and research institutions are open and welcoming and we maintain a strong commitment to research collaboration across Europe.

“The Scottish research community is standing together.

“We know that Scotland’s research has been strengthened by EU citizens working in Scotland, our membership of the European Union and our active participation in the Horizon 2020 programme.

“The benefits that such participation has provided cannot be underestimated and we will not stand by and see these benefits eroded and obstacles erected that undermine our future.”

Last month, a joint statement was issued by colleges, universities, trade unions and the Scottish Government committing to protect the college and university sectors following the UK’s withdrawal from the EU.

Meanwhile, the Scottish Government confirmed eligible EU students currently studying in Scotland or those starting a degree this year or next will continue to be eligible for free tuition.

They say Scotland has proportionally more EU staff and students than the rest of the UK with approximately 9% of all university students and 27% of full-time research staff are from the EU.

Alastair Sim, director of Universities Scotland, said: “The quality of the research and education Scottish higher education delivers is strengthened because of the partnerships we have across the European Union.

“Those relationships are deeply important to us and that remains the case whatever the outcome of the Brexit process.

“It’s a message we need to keep repeating so it is not lost amidst the noise and chaos going on elsewhere and that’s why it is good to be out in Brussels this week.” 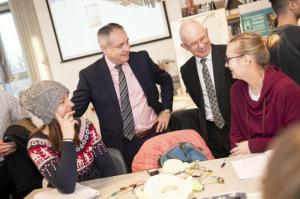 Read More
Written by News & Star,
Source link: https://www.newsandstar.co.uk/news/national/17286025.scotlands-universities-remain-open-to-eu-students/
Previous Next
Upnext in
Disclaimer UniAgents does not author any news or content in this section. We aggregate News Headlines, Summary, and Content from over 700 sources, explicitly listed in every article/page. Users can visit the sources for full articles and more local news. The sole aim is to aggregate education news from around the world so they can be categorised and the user can have a personalised experience. In some cases, the original article has news in native language but listing on UniAgents for each article is done in English. There are no copyright infringements, as we do not claim to produce any content mentioned on this page, all relevant sources are mentioned. For any clarifications, do not hesitate to contact us.