Go Back to the List October 26, 2018
Ministry backpedals on 'gagging' rules for academics

Attempts by the government of India to impose new rules on centrally funded universities that would restrict academic freedoms and the right to protest or strike are being reversed due to widespread opposition. Academics saw the measures as a push by government to control universities.

Amid widespread criticism on campuses that such an imposition undermined academic freedom and institutional autonomy, the Human Resource Development Ministry responsible for higher education pulled back on its policy, and clarified that enforcement of Central Civil Services (CCS) rules was not mandatory but optional for academic institutions, despite a directive issued by the regulatory body the University Grants Commission (UGC).

The UGC directive sent in May to all 47 central universities called on them to follow CCS rules on the conduct of faculty.

In a separate development seen as another victory for academic freedom, the government was also forced to backtrack on an attempt to bring Delhi University under the Essential Services Maintenance Act (ESMA), which would have restricted the right of university staff to strike or hold protests on campus.

Human Resource Development (HRD) Minister Prakash Javadekar said in a tweet on 20 October referring to ESMA and CCS rules: “We have neither put any restrictions nor intend to put any restrictions on ‘freedom of speech’ in JNU, Delhi University or any other university.”

The JNU administration last week withdrew campus CCS rules in the face of widespread criticism. JNU Vice-Chancellor M Jagadesh Kumar had adapted university ordinances at an academic council meeting on 5 October to bring the institution in line with the UGC’s May directive.

CCS conduct rules say no government servant shall, except with the previous sanction of the government, conduct or participate in the editing or management of any newspaper or other periodical publication or electronic media. Government servants are also barred from issuing any statement to the press or making any public utterance that adversely criticises any current or recent policy or action of the government.

This amounted to a ban on professors saying or publishing anything deemed inappropriate by the government, according to academics. The Federation of Central Universities’ Teachers’ Associations (FEDCUTA) said attempts to impose the CCS conduct rules on university and college teachers were “illegal and unconstitutional”.

FEDCUTA noted several of the newer central universities had adopted the CCS rules and noted with alarm that the Central University of Kerala “recently invoked CCS conduct rules to suspend a faculty member for a Facebook post that criticised the university administration for getting a student arrested”.

The Jawaharlal Nehru University Teachers’ Association (JNUTA) said the application of CCS rules was an attempt by the JNU administration to “underhandedly stifle criticism against government policies” and was an attack on independence of thinking and the freedom to dissent.

JNU staff welcomed the 22 October announcement of the withdrawal of the CCS conduct rules by the university. JNU Registrar Pramod Kumar said in a statement: “The vice-chancellor has confirmed that no CCS rules have been incorporated in JNU ordinances.” JNU’s executive council has said it will set up a committee to frame its own conduct rules.

JNUTA and others described the reversal as “a victory for academic freedom”.

“Enforcement of CCS rules for teachers was a foolish move. The administration was trying to destroy academic freedom and autonomy of the institution,” said Delhi University Teachers’ Association (DUTA) President Rajib Ray.

JNU Students’ Union President N Sai Balaji said: “This is a big win for students and teachers and our collective fight against the authoritarian clampdown on free speech and thought has been successful.”

However, many want a complete rollback. JNU Professor Ayesha Kidwai said: “Many central universities had already been brought under the ambit of CCS and the academics must fight for their withdrawal from all institutions.”

HRD Ministry Secretary R Subrahmanyam has said the application of CCS rules in service matters “arises only where the university is yet to form their own ordinances”. Once done, the provisions of such ordinances apply and not the CCS rules, he said.

Close on the heels of the bid to enforce CCS rules in universities, another controversial action by the HRD ministry drew widespread flak when it proposed to impose the Essential Services Maintenance Act (ESMA) on staff of Delhi University. It was forced last week to backtrack in the face of stiff opposition.

The government proposed to bring teaching, learning, examinations and paper evaluation at Delhi University (DU) under the provisions of the act which meant teachers could be arrested and imprisoned for holding strikes.

An HRD ministry official said it was necessary because frequent strikes by DU teachers and other staff hampered studies and the conduct of exams. The university’s teachers and students have organised protests in the last two years over a range of central government decisions, including the graded autonomy scheme of UGC, which allows some institutions more autonomy, and revised rules for the appointment and promotion of university teachers. Most recently DU teachers boycotted examination paper evaluations in May-June this year.

The UGC on 4 October announced the formation of a seven-member working group to study the Delhi University act to bring exam, teaching, learning and evaluation under the ESMA. But DUTA alleged the moved aimed to stifle criticism, crush voices of dissent and silence the academic community. The teachers said they would not be able to oppose even the wrong policies of government and argued that ESMA would downgrade the teaching profession.

Sudhanshu Kumar, member of Academics for Action and Development, said: “The government has a hidden agenda to turn government-aided institutions into private fiefdoms.”

The ministry’s Subrahmanyam tweeted: “There is no such proposal to bring Delhi University under ESMA. The suggestion to ban strikes in the examination services came from some affected students during the DUTA strike. We have examined it and are not going ahead with the suggestion.”

In another tweet Subrahmanyam said that the working group constituted by the UGC was being disbanded. 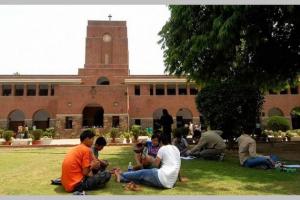 Read More
Written by Shuriah Niazi,
Source link: http://www.universityworldnews.com/article.php?story=20181026124012244
Previous Next
Upnext in
Disclaimer UniAgents does not author any news or content in this section. We aggregate News Headlines, Summary, and Content from over 700 sources, explicitly listed in every article/page. Users can visit the sources for full articles and more local news. The sole aim is to aggregate education news from around the world so they can be categorised and the user can have a personalised experience. In some cases, the original article has news in native language but listing on UniAgents for each article is done in English. There are no copyright infringements, as we do not claim to produce any content mentioned on this page, all relevant sources are mentioned. For any clarifications, do not hesitate to contact us.