France’s decision to hike tuition fees for international students more than tenfold has triggered a standoff with universities and revived a debate about the role of state-funded higher education and its responsibility to the French-speaking world.

When Abdalah Faye looked beyond his native Senegal for a place to pursue his university studies, there was only ever one destination on his mind: France, the former colonial power and traditional destination for expatriate students from the West African country.

“France and Senegal share a common language, a common history, our education system is copied on the French, we value French diplomas more than our own, and France is home to many of my fellow countrymen,” said the 27-year-old politics student, listing the reasons that brought him to France.

And then there’s the money issue. Higher education in France has long been much cheaper than in other Western countries – in fact almost free, for foreigners and French nationals alike.

“France is the country that gives everyone an equal chance,” said Faye, who is pursuing a master’s degree at the University of Versailles Saint-Quentin-en-Yvelines (UVSQ), west of Paris. “That includes the children of farmers from the remotest corners of Senegal, who couldn’t possibly think of studying in America, Canada or elsewhere.”

Home to centuries-old universities such as the Sorbonne in Paris, as well as leading business schools, France is the world's top non-English-speaking destination for students, though it ranks well behind the United States and Britain, and is now trailing Australia too. The number of foreign students at French universities fell by 8.5 percent between 2011 and 2016 and the country has seen increased competition from Germany, Russia, Canada and China.

In order to address the “shifting balance of power” in global education, France’s government has unveiled a plan, dubbed “Welcome to France”, to lure more international students. Measures include simplifying student visa regulations, offering more English-language courses and improving accommodation, in an effort to increase the number of foreign students from roughly 300,000 today to more than half a million by 2027.But the revamped “welcome” will come at a cost for international students, who have so far enjoyed near-free higher education, just like French and EU nationals. When the new academic year begins in September, non-EU students will see their annual fees for a bachelor degree jump from €170 ($195) to €2,770, while the cost of a master’s or doctoral degree will go from the current €243 per year to €3,770 – a 1,600% increase.

Announcing the measures back in November, Prime Minister Edouard Philippe stressed that France would still “subsidise two thirds of the cost of studies" – averaging at just over €10,000 per year for each student. "And the fees will remain well below the €8,000 to €13,000 charged by the Dutch or the tens of thousands of pounds paid in Britain," he added.But that is small comfort for the likes of Faye, who already struggles to make ends meet while working the maximum 20 hours per week authorised for foreign students.
“I never took a cent from my family back home,” Faye told FRANCE 24. “I already have to skip classes to work so that I can afford my food and rent. There is no way I can afford the fees as well.”
Paradigm shift’

The decision to massively increase tuition fees has been described as a “paradigm shift” by France’s Conference of University Presidents, an umbrella organisation representing the heads of France’s 75 universities. The conference has been cautious in its response, welcoming many of the government’s measures while warning that top students from abroad should not be priced out of the system.

The body also warned that the prospect of increased income from fees should not be used as a pretext for a decline in state funding – a persistent concern in a country attached to the principle of publicly-funded education.

The response from individual university presidents has been more critical, with several openly defying the government. By mid-January, seven universities had announced they would not charge international students higher fees in the forthcoming academic year, prompting a rebuke from the higher education minister, Frédérique Vidal, who stressed their “duty of obedience and loyalty” as civil servants.

French universities are allowed to waive fees for up to 10 percent of their students, meaning they will have some leeway to refuse to apply the increased fees without actually flouting the law.

Some university heads pointed to a lack the information and consultation surrounding the reform, noting that the government’s top-down approach contradicted its stated aim to strengthen universities’ autonomy in what remains a highly centralised system.

“There was no discussion with the academic world,” lamented Nathalie Dompnier, president of Lyon 2 University. “We discovered the figures in November and received no explanation for the increase in fees and how it was calculated. We don’t know what financial support measures will be put in place, so we will not implement the fee increase.”
Others decried a measure that “discriminates” against foreign students and introduces a form of “selection by money”.
“France honours itself by showing it can welcome students from poor backgrounds, we must not turn back on this principle,” said Nadia Dupont, an administrator in charge of training at the University of Rennes-II, in western France.
Burden or asset?
Supporters of the hiked fees say there is a principled case for ensuring foreigners contribute to funding a costly education system.
“In so far as state higher education in France is essentially financed through public funds and thus by taxpayers, it is appears logical to ask for a contribution from the students (and parents) who do not pay taxes,” writes Professor Jérôme Caby of the Sorbonne Business School in Paris.
However, a study commissioned in 2014 by Campus France, a government body in charge of promoting French universities abroad, has shown that foreign students have a beneficial impact on the local economy: while the state spends €3 billion each year on their education, they contribute €4.65 billion to the French economy.
As Daniela Susanibar Rosas, a law student at Paris-1 University, told the FRANCE 24 Debate show: “We work here, we pay rent, we move the economy – there are small cities in France that work only because they are student cities.”
Jean-Claude Lewandowski, an education specialist, said the fees hike will only be successful if the reform meets three conditions: a huge expansion in bursaries and loans, a sweeping cut in administrative obstacles (notably visa restrictions and access to housing), and better integration of newcomers.

“Aside from the issue of tuition fees, foreign students are often poorly welcomed in France,” Lewandowski wrote on his blog, citing expensive accommodation, run-down campuses and a lack of communication with local students and staff members. In this respect, he added, the prime minister’s promises to ease visa restrictions, expand scholarships, and offer newcomers more French-language classes signal a positive step.

Critics of the hiked fees have been less than impressed with the prime minister’s suggestion that foreigners regarded free education as being cheap in quality – and that the top students would therefore look elsewhere.

“Philippe thinks that introducing higher fees will make France more attractive because international students associate price with value,” writes education expert Juliette Torabian in the Times’ Higher Education Supplement. Whereas “research suggests that international recruitment is most sensitive to perceived quality of teaching and institutional reputations. While universities in some countries charge higher international fees, they also provide students with a high return via their good reputations with employers and the quality of their facilities, accommodation and pastoral and academic support.”

Analysts at the OECD say raising tuition fees can be a “double-edged sword”, sometimes leading to a steep decline in the number of international applicants. While New Zealand was able to offset higher fees with a generous scholarship policy and expanded working rights for foreign students, a dramatic increase in fees for foreigners in Sweden in 2011 coincided with an 80% slump in applications from abroad.

“A reduction in the number of international students can potentially harm a tertiary education system, as international students do not only bring their financial contribution, but also a diversity of perspectives and cultures that improves the educational experience of all students,” write OECD analysts Daniel Sanchez-Serra and Gabriele Marconi.

“Discrimination by nationality can also harm the student experience by creating divides between students,” they add.

In some cases, attempts to discriminate between national and foreign students have actually brought the two closer together – in protest.

Last year Belgian students successfully rallied against plans to charge higher fees for international students, forcing the government to back down. Similarly, since Philippe’s announcement in November, French students have staged a number of protests – the largest drawing crowds of several hundred – to denounce an “unfair and discriminatory measure” and express their “fraternity” with foreign students.

Much of the criticism levelled at the government’s plan revolves around the universal mission that education is invested with under France’s republican tradition, a mission that underpins the extensive network of French schools scattered across the globe. In this case, it is coupled with an element of post-colonial responsibility, or guilt, towards former dominions.
In a Le Monde op-ed signed by more than 60 professors and lecturers, French academics said the fees would inevitably lead to a decline in the number of African students – who currently account for 45% France’s of international students – enrolling in the country’s universities, noting that the vast majority would no longer be able to afford higher education in France.

By denying African students “a dignified welcome, France gives up on its privileged relationship with the African intellectuals, engineers and executives of tomorrow,” the authors wrote, lamenting a measure that will accelerate “France’s loss of credibility on the continent”.

Already Africa’s brightest minds are being lured to China, India and Middle Eastern countries where “Islamist ideologies hold sway”, they said, adding: “France’s decision to turn its back on African youth signals the abandonment of the universalist […] message carried by French social sciences on the African continent.”

According to researchers Lama Kabbanji and Sorana Toma, of the Institute for Development Research and the University of Paris-Saclay respectively, the introduction of tuition fees is in line with a decade-old policy of “chosen immigration”, which has resulted in a relative decline in the number of immigrants from poorer countries and students from Africa.

Lawmaker M’jid El Guerrab, who represents French nationals in West and North Africa, including Senegal and Morocco, said such measures would only increase the “Francophobic” sentiment witnessed among youths in his vast constituency, and the sense that “they are unwanted” in France.
“For some Moroccan families, the fees announced by Edouard Philippe are the equivalent of a year’s salary,” El Guerrab told Jeune Afrique, noting that less than 1% of Moroccan students in France currently benefit from scholarships. “French universities will therefore become the exclusive preserve of the wealthy, and this selection by money is not in line with our republican tradition.”
For Faye, the Senegalese student, the new government policy reflects changing attitudes in France, and a hardening stance on immigration in particular.
“France no longer wants to give privileged access to people from its former colonies, it wants wealthier students,” he said, adding: “But the wealthy don’t come to France – they go to America.” 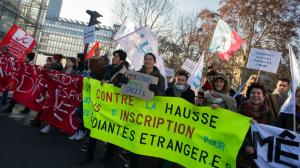 Read More
Written by Benjamin DODMAN,
Source link: www.france24.com/en/20190120-france-education-university-tuition-fees-international-foreign-students-africa
Previous Next
Upnext in
Disclaimer UniAgents does not author any news or content in this section. We aggregate News Headlines, Summary, and Content from over 700 sources, explicitly listed in every article/page. Users can visit the sources for full articles and more local news. The sole aim is to aggregate education news from around the world so they can be categorised and the user can have a personalised experience. In some cases, the original article has news in native language but listing on UniAgents for each article is done in English. There are no copyright infringements, as we do not claim to produce any content mentioned on this page, all relevant sources are mentioned. For any clarifications, do not hesitate to contact us.