Go Back to the List April 05, 2019
Struggling Student Loans Board draws on Lessons from Ghana

The Higher Education Students' Financing Board (HESFB) in Uganda said this month it was exploring the feasibility of instituting a fund similar to the Ghana Education Trust Fund (GETFund), which would allow it to mobilise more monies to finance more students, after a deficit last year of UGX5 billion (US$1.3 million) threatened the admission of new students into the higher education sector.
Michael Wanyama, executive director of the HESFB, said the board relied on government for funding “100%” but it was thinking “outside the box” and looking at a number of options that could make it more sustainable.

“We want to engage government to institute an education trust fund, where certain percentages of the value added tax (VAT) are isolated for educational financing,” said Wanyama. At the moment, Ghana separates its GETFund levy (2.5%) from 12.5% VAT. The fund takes care of basic infrastructural and teacher remuneration needs in the country, and also facilitates higher education student loans. The student loan body in the West African country has access to almost 10% of the GETfund, enabling it to finance more students at higher education.

This is what the HESFB in Uganda wants to copy.
“But, of course, we know it will take time [to convince parliament and the ministry of finance in Uganda of such an arrangement],” said Wanyama.

In the meantime, the board is seeking donations and writing grant proposals to marshal more funds.
“The law permits us to seek donations and grants,” said Wanyama in an interview with University World News. “We are engaging possible donors, though a number are interested in particular programmes,” he said.

Kibedi Nkuutu, principal education officer at the ministry of education in Uganda, said the board could look to cost-sharing and the possibility of engaging partners, but it needed to draw on faster mechanisms to collect monies spent on students.

“The idea was to make the [students] loan scheme more of a revolving fund, so money collected from beneficiaries can support newer students – otherwise it will not be sustainable,” said Nkuutu.

“The board needs to be stringent with beneficiaries who have completed school and should be repaying the money,” he said.

“The law says the board shall notify the beneficiaries within 30 days to start paying after completion of the course and a one-year grace period,” said Wanyama.

Jobless graduates delay repayments He said beneficiaries “were paying”, although slowly, with “a number of them yet to find sources of income”, he said.

“Loans are tricky,” said Wanyama. “People come to you when they want a loan. But you have to go after them when it is payback.”

The law states that a beneficiary shall notify the board if they have no income and the board can reschedule payment arrangements after verifying the beneficiary’s status.

Robinson Nsumba Lyazi, an educationist and former director for basic and secondary education in Uganda, said the board could try and find job placements for some of the beneficiaries.

“They need to attach them to some employers and some companies so they can start repaying the loans immediately they are through with their education,” said Lyazi.

He said the board cannot “hide” behind “unemployment” and fail to collect the debt if it is to deliver a sustainable scheme. “The board can do it (attach beneficiaries to relevant work places). It has the capacity to do it,” said Lyazi in a telephone interview.

He suggested that the board identify strategic entrepreneurship skills for beneficiaries so they can start income-generating activities earlier and not wait upon formal employment before repaying their loans.

“They are already prioritising students who study mathematics, science and engineering for the loans. So, it shouldn’t be hard to add a skills component,” he said.

But the HESFB executive director is confident beneficiaries will eventually repay the loans and said the board had employed three officers in its recovery department to aid in the loan recovery process.

Wanyama said the board has worked with the Federation of Uganda Employers to enable beneficiaries to meet their obligation immediately they started work.

“Deductions of not more than 30% of net pay should be made every month until the loan is recovered,” said Wanyama. Beneficiaries of three-year programmes are required to repay the money in six years; those of four-year programmes in eight.

“It is a fair strategy aimed at giving otherwise disadvantaged but smart students a chance at education,” Wanyama said. Wanyama said the beneficiaries were also listed with the Credit Reference Bureau, which rendered them unable to borrow money from any financial institution in the country in the event they defaulted and the loans were protected: beneficiaries pay loan protection fees equivalent to 1% of the gross loan amount, so they can never make a loss, said Wanyama. 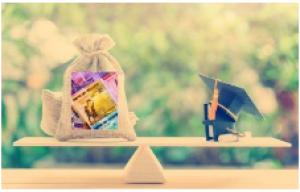 Read More
Written by John Agaba,
Source link: https://www.universityworldnews.com/post.php?story=20190402084605921
Previous Next
Upnext in
Disclaimer UniAgents does not author any news or content in this section. We aggregate News Headlines, Summary, and Content from over 700 sources, explicitly listed in every article/page. Users can visit the sources for full articles and more local news. The sole aim is to aggregate education news from around the world so they can be categorised and the user can have a personalised experience. In some cases, the original article has news in native language but listing on UniAgents for each article is done in English. There are no copyright infringements, as we do not claim to produce any content mentioned on this page, all relevant sources are mentioned. For any clarifications, do not hesitate to contact us.