Go Back to the List September 23, 2019
Egypt opens 2 new smart universities in the New Administrative Capital

Egypt’s Minister of Higher Education and Scientific Research Khaled Abdel Ghaffar on Monday opened two new smart universities, the Knowledge International University in the New Administrative Capital and the Technology University in New Cairo, in collaboration with the Salesian Don Bosco Technical Institute in Cairo and the University of Turin.

During the opening ceremony, Abdel Ghaffar said that the ministry’s strategic 2030 vision has concentrated on improving the quality of higher education and providing researchers with the appropriate knowledge, educational skills and tools to become the leaders of the future.

He pointed out that the ministry has taken measures, such as issuing a law organizing the establishment of branches for foreign universities in Egypt, to provide higher quality education for Egyptian and foreign students.

The opening ceremony was attended by the head of the UK’s Coventry University John Latham, the head of Knowledge International University Mahmoud Allam, founder of the Sewedy Educational Establishment Ahmed Sewedy and the CEO of the Swedish Education Foundation Ehab Salama.

In February 2019, Egypt’s government announced the construction of eight international universities in the New Administrative Capital by 2020 during a visit to the University of Canada in Egypt.

The ministry also announced back in May that a comprehensive vision was prepared for the transition into smart universities within two years, at both administrative and educational levels, in addition to the development of the national strategy for Artificial Intelligence (AI) and the establishment of faculties for computers, information and artificial intelligence in universities. 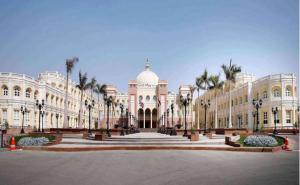 Read More
Written by Al-Masry Al-Youm,
Source link: https://egyptindependent.com/egypt-opens-2-new-smart-universities-in-the-new-administrative-capital/
Previous Next
Upnext in
Disclaimer UniAgents does not author any news or content in this section. We aggregate News Headlines, Summary, and Content from over 700 sources, explicitly listed in every article/page. Users can visit the sources for full articles and more local news. The sole aim is to aggregate education news from around the world so they can be categorised and the user can have a personalised experience. In some cases, the original article has news in native language but listing on UniAgents for each article is done in English. There are no copyright infringements, as we do not claim to produce any content mentioned on this page, all relevant sources are mentioned. For any clarifications, do not hesitate to contact us.