Go Back to the List August 28, 2019
Australia plans to tackle foreign influence at nation's universities

In response to growing concerns in Australia about foreign influence at universities, cyberspying, and a perceived erosion of freedom of speech on campuses, the country’s education minister today announced that a new task force will develop “best-practice guidelines for dealing with foreign interference.” The decision grew out of recent meetings between university and government representatives, Minister for Education Dan Tehan said in a speech at the National Press Club of Australia in Canberra this afternoon. “Everybody wants a considered, methodical approach to deal with this issue,” he said, “one that strikes a balance between our national interest and giving universities the freedom to pursue research and collaboration. We must get the balance right.” Tehan did not mention China, according to a ministry transcript of the news conference. But it is clear the country is the primary concern. “There’ve been a series of miniscandals throughout the tertiary education sector that show there is a big problem of foreign interference in universities coming from China, and the government has now realized that the universities themselves are not going to act,” says Clive Hamilton, an ethicist at Charles Sturt University in Canberra who has been outspoken in warning about threats to Australia’s universities. SIGN UP FOR OUR DAILY NEWSLETTER Get more great content like this delivered right to you! Email Address * Chinese influence is a sensitive issue, however. On Monday, before the guideline plans had been announced, Michael Spence, vice-chancellor of the University of Sydney in Australia, said on a radio program that the debate over Chinese connections has become “slightly hysterical.” The University Foreign Interference Taskforce will draw half of its participants from the nation’s universities; Department of Education officials and government security experts will make up the other half. The task force will have four working groups focusing on cybersecurity, intellectual property, foreign collaborations, and communications to raise awareness of security issues. It will aim to produce guidelines by November. The recent incidents include a massive breach of Australia National University’s computer systems, revealed in June, that netted the hackers—suspected of being based in China—personal details on up to 200,000 students and staff dating back 19 years. There have also been allegations of universities unwittingly working with entities connected to China’s military. On Monday, the Australian Strategic Policy Institute published a report claiming that artificial intelligence software being used to surveil the minority Uyghur population in China’s Xinjiang region “may have benefited from connections with Australian universities and Australian government funding.” A 20 August report by sociologist Salvatore Babones of the University of Sydney also warned that Australia’s universities have become overly reliant on international—and particularly Chinese—student fees. At the seven top universities, tuition fees paid by Chinese students account for 13% to 23% of total revenues, which puts the institutions in a precarious financial position, Babones writes in a report published by the Center for Independent Studies, a Sydney-based think tank. The report notes that 11% of all university students in Australia hail from China, versus 2% in the United States and 6% in the United Kingdom. The more than 150,000 Chinese students in Australian higher educational institutions account for 38% of international enrollees. That large Chinese presence raises other concerns as well. In recent months, so-called Lennon Walls, where people could post notes of encouragement to pro-democracy protesters in Hong Kong, China, have been repeatedly vandalized. On several occasions, scuffles broke out between pro–Hong Kong demonstrators and those supporting mainland China. Punches were thrown during a confrontation on the campus of University of Queensland (UQ) in Brisbane, Australia. “What the recent demonstrations on university campuses over Hong Kong show is that universities remain firmly committed to freedom of expression,” UQ Chancellor Peter Varghese wrote in a statement responding to the public clamor over such incidents. “Restricting that freedom through intimidation and disruption is unacceptable, as is threatening the families of those who participated.” Against that background, Hamilton says, “The government gives every impression that this is going to be a thorough-going review leading to major changes. 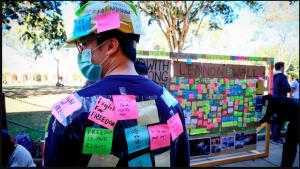 Read More
Written by Dennis Normile,
Source link: https://www.sciencemag.org/news/2019/08/australia-plans-tackle-foreign-influence-nations-universities | https://www.sciencemag.org/sites/default/files/styles/inline__699w__no_aspect/public/lennonwall_1280p.jpg?itok=GHDpr_c8
Previous Next
Upnext in
Disclaimer UniAgents does not author any news or content in this section. We aggregate News Headlines, Summary, and Content from over 700 sources, explicitly listed in every article/page. Users can visit the sources for full articles and more local news. The sole aim is to aggregate education news from around the world so they can be categorised and the user can have a personalised experience. In some cases, the original article has news in native language but listing on UniAgents for each article is done in English. There are no copyright infringements, as we do not claim to produce any content mentioned on this page, all relevant sources are mentioned. For any clarifications, do not hesitate to contact us.