Go Back to the List March 01, 2019
"A knowledge race" Australian universities set to suffer drop in students from China.

The number of Chinese students studying in Australia will decline over the next decade as a key competitor in the lucrative international education market - China - invests in itself, the vice-chancellor of a leading university has warned. The University of NSW's Professor Ian Jacobs, said the number of Chinese undergraduates travelling to Australia is dropping as China invests heavily in building universities and attracting research talent.

"They are getting more universities, and those are getting much better quality, very rapidly," said Professor Jacobs. "The Chinese government understands education is everything if they are going to be the high tech country they aspire to be." Numbers of Chinese students travelling to Australia, the United Kingdom and the United States will "gradually wane," he said, but the numbers could be made up by students from other countries amid a global "thirst for education".

"My assessment [is] over a 10-year period, [Chinese students] will gradually decrease. We are already starting to see a slight decrease in the number of undergraduate students from China as the opportunities increase. "Demand is still very high, and postgraduates is higher than ever. I am not sure if we have yet hit the peak. More and more students from China want opportunities and their system cannot yet respond to demand. But we have to face the fact that it gradually will." Students from China make up more than a third of Australia's international university enrolments. Last year there were 125,000 students, 60 per cent of them at Group of Eight universities. International education is Australia's third-largest export, worth $30.3 billion in 2017. But last year, China invested $222 billion in higher education, $2 billion shy of its defence budget. It is rapidly building universities and spending money on luring top research talent and students from across the globe. In this week's QS university subject rankings, Australia slipped slightly backwards "across the board", said UNSW's pro vice-chancellor (international) Laurie Pearcey, while noteworthy gains came from mainland China and Singapore. Last century, global competitiveness was measured by defence assets, but the new international battleground was education, Mr Pearcey said.

"What China's rise is pointing to is the number of universities you have in the top 100 is a major indicator of what constitutes a great power," he said. "It's not an arms race, it's a knowledge race, and that's really exciting." UNSW, like other Australian sandstone universities such as Sydney University, is looking to diversify by increasing the number of students coming from markets such as India and other parts of south-east Asia and the Pacific. Some wealthy Indian families that once looked to top British and US universities were now looking elsewhere because of post-study work restrictions in the UK, and political uncertainty due to Brexit and Donald Trump's presidency. "The geopolitical things going on - Brexit and Trump - is affecting that," Professor Jacobs said. "It makes them feel slightly less welcome." With Australia likely to overtake the UK as the second-most popular destination for students this year, UNSW is also looking to Asia. "Indonesia is a massive market," Professor Jacobs said. "Then there's the whole rest of the Asia Pacific." However, China will also become a competitor in the region, said Mr Pearcey. "Let's not forget that China has invested financial capital on aggressive targets for international students," he said. Mr Pearcey did not believe tensions with China over coal imports will affect the numbers of international students. "Most are self-funded, so it's not as though the Chinese government has a means to turn that tap off," he said. 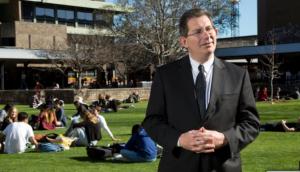 Read More
Written by Jordan Baker,
Source link: https://www.smh.com.au/education/a-knowledge-race-australian-universities-set-to-suffer-drop-in-students-from-china-20190301-p5113e.html | https://www.smh.com.au/education/a-knowledge-race-australian-universities-set-to-suffer-drop-in-students-from-china-20190301-p5113e.html
Previous Next
Upnext in
Disclaimer UniAgents does not author any news or content in this section. We aggregate News Headlines, Summary, and Content from over 700 sources, explicitly listed in every article/page. Users can visit the sources for full articles and more local news. The sole aim is to aggregate education news from around the world so they can be categorised and the user can have a personalised experience. In some cases, the original article has news in native language but listing on UniAgents for each article is done in English. There are no copyright infringements, as we do not claim to produce any content mentioned on this page, all relevant sources are mentioned. For any clarifications, do not hesitate to contact us.