Foreign university applicants are hampered by a slow and complicated process of granting residence permits.
In an Yle survey many Finnish universities and higher education institutions have criticised what they see as needless bureaucracy associated with Finnish immigration policy.

They say it's hard to boost the number of foreign students coming applying for permits if potential students have to wait months for permission to stay in the country.

Yle interviewed representatives from 18 universities of applied sciences and 8 universities and found that the clear majority would like to see more fluid and speedy residence permit processing in Finland. Only 3 of the 26 felt the current system functioned well.

Higher education has been touted as having the potential to be a moneyspinner for Finland as tuition fees of up to 18,000 euros per academic year have been required since 2016 for students originating from outside the European Union, the European Economic Area and Switzerland.
Schools say the weakest link in the chain are Finland's embassies and consulates, as a lack of resources makes it difficult for applicants to university programs to identify themselves to the Finnish mission authorities. Biometric identification is now a prerequisite for the residence permit application process to start.
Decisions from the Finnish Immigration Service (Migri) sometimes take months, causing some new students to miss the start of classes.
Universities report losing potential students
"The long processing period for student residence permits is unreasonable for people who are making decisions about continued studies and their future work path. Because of this, Finland is losing higher education students who have already been accepted in other countries," says Kati Heikkinen, director of international studies at the Häme University of Applied Sciences.
The result shows a consensus among the schools that something must be done quickly to improve the situation.

"The processing times of residence permits need fine-tuning. They have to be shortened so students have a genuine chance to start their studies at the same time as their colleagues, so they can integrate into the student community," says student services chair Eija Zitting of Aalto University.
Migri: Supplemental material makes process longer
In 2018, Migri processed 5,200 residence permits associated with a study place, close to 90 percent of which received positive decisions.

Tiina Suominen, head of Migri's immigration unit, says this is because, in addition to proof that a study place has been granted, the applicant has to show that they have enough money in their own bank account (560 euros monthly) to pay for their living expenses in Finland. They must also be prepared to show proof about the source of this money, if required. This means that when applying for a two-year stay in Finland, for example, accepted students have to have 13,440 euros at their disposal.
Suominen says that many applications are not filled out properly, which also creates extra work and delays. She also points her finger at the universities for some of the timing problems.
"One big problem is that we aren't given any kind of warning that certain groups are coming and they need to start their studies at a certain time. We are generally informed just a few weeks ahead of time and then we have very little time to get things done," she says.

She says that if universities in Finland want foreign students to start in the autumn, then they should encourage them to start their residence permit process as early as May. Some higher education institutions in the country, however, don't finalise their are admissions decisions until July and August 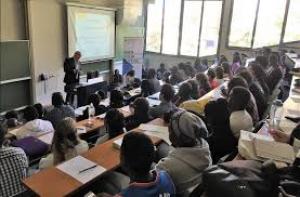 Read More
Written by Yle,
Source link: https://yle.fi/uutiset/osasto/news/universities_claim_foreign_student_enrolment_stymied_by_residence_permit_red_tape/10712933 | https://www.google.com/search?rlz=1C1CHBD_enIN817IN817&biw=1360&bih=608&tbm=isch&sa=1&ei=-OCqXPPiFsfhz7sP0fKluA8&q=residence+permit+red+tape&oq=residence+permit+red+tape&gs_l=img.3...23288.23288..23706...0.0..0.114.114.0j1......1....1..gws-wiz-img.AsXLWhj
Previous Next
Upnext in
Disclaimer UniAgents does not author any news or content in this section. We aggregate News Headlines, Summary, and Content from over 700 sources, explicitly listed in every article/page. Users can visit the sources for full articles and more local news. The sole aim is to aggregate education news from around the world so they can be categorised and the user can have a personalised experience. In some cases, the original article has news in native language but listing on UniAgents for each article is done in English. There are no copyright infringements, as we do not claim to produce any content mentioned on this page, all relevant sources are mentioned. For any clarifications, do not hesitate to contact us.