Go Back to the List October 08, 2018
In Lucknow, 550 students set new Guinness World Record by extracting DNA from bananas

The fourth edition of the India International Science Festival (IISF) that started last week in Lucknow has seen over 500 students of a school set a new Guinness World Record by extracting DNA (DeoxyriboNucleic Acid) from bananas. Previously, a total of 302 students of the Seattle Children’s Research Institute, had participated to extract DNA from a fruit in February last year.

Ram Singh, who works as a gardener in the GD Goenka Public School, brought 15 dozen or 180 bananas from a local market. On Saturday, the 550 students of classes VII to XII participated in the event to extract DNA from the fruit using a custom-made kit. The DNA or DeoxyriboNucleic Acid is the hereditary material which has its presence in almost all creature including humans.

Within the duration of an hour, the students succeeded in doing the job after several attempts. The latest record for the experiment was completed in 61 minutes. After the event, the Principal of the school received the GWR or Guinness World Records certificate. Yesterday, another group successfully made a world record for most people conducting first-aid classes.

Before the event could take place, Renu Swarup, Secretary, Department of Biotechnology exuded confident of winning. Speaking to The Indian Express, Swarup said, “We are going to win…What will we say when we win?” Responding to Swarup’s question, a student said ‘Jai Hind.’

Modhumita Dasgupta, who was the instructor of the event, from the Institute of Forest Genomics and Tree Breeding in Coimbatore said that these events will bring science closer to students. “DNA is so crucial. Yesterday, I faced so many interesting questions from them (students), some were surprised that even a banana has DNA,” said Dasgupta, reports IE.

Rishi Nath, the adjudicator of the Guinness World Records said, “I have been told that there will be a precipitate that forms at the end, and that is an indication that the DNA has been isolated,” as quoted by IE. During the entire event, the students were barred from talking to each other. 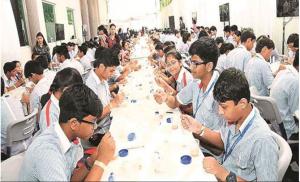 Read More
Written by Financial Express,
Source link: https://www.financialexpress.com/education-2/in-lucknow-550-students-set-new-guinness-world-record-by-extracting-dna-from-bananas/1341165/
Previous Next
Upnext in
Disclaimer UniAgents does not author any news or content in this section. We aggregate News Headlines, Summary, and Content from over 700 sources, explicitly listed in every article/page. Users can visit the sources for full articles and more local news. The sole aim is to aggregate education news from around the world so they can be categorised and the user can have a personalised experience. In some cases, the original article has news in native language but listing on UniAgents for each article is done in English. There are no copyright infringements, as we do not claim to produce any content mentioned on this page, all relevant sources are mentioned. For any clarifications, do not hesitate to contact us.