Go Back to the List May 09, 2021
A-level and GCSE grade inflation ' inevitable in English system '

School leaders and education experts have warned that GCSE and A-level results this summer will see levels of grade inflation similar to last year despite onerous measures imposed on teachers to try to make the system fair.

Teacher-assessed grades will replace exams in England this summer as part of the fallout of mass school and college closures amid the Covid pandemic. But there are fears that schools with a strong track record for results – such as independent schools and grammars – could benefit disproportionately, submitting more generous grades that escape subsequent scrutiny, while others that exercise caution could lose out.

Teachers have described having to fill in multiple forms for every assessment of each pupil as part of a system of checks and balances to provide evidence and justify grades awarded. Some schools have also decided to deliver exams or mocks to help inform the grades.

“The form-filling is seemingly endless,” said a teacher at a north-west London secondary school whose students will be assessed based on mock exams in March and other tests this month. “The stress at the moment for me is off the scale. The workload is unbearable at times.”

Experts have warned, however, that grade inflation is inevitable even with additional levels of scrutiny promised by the qualifications regulator Ofqual, and they say another year of inflated results will make it harder to return to exams pegged to pre-pandemic results next year.

Last year, when the Department for Education abandoned its algorithm in favour of school-assessed grades, there was a 13 percentage-point increase in A and A* grades awarded at A-level.

“There’s inevitably going to be grade inflation in the system this summer. That’s not because teachers are cheats but because we are human and we’ve been given an impossible task,” said Stuart Lock, the chief executive of Advantage Schools in Bedford.

Teachers are working to assess, mark and moderate their pupils’ results, but across the country a variety of assessment methods are being used in different schools, making it impossible to compare outcomes between areas of the country, critics say.

“The whole point of the system is it should be the same in Hartlepool as it is in Penzance. That’s not going to be the case and schools will be hung out to dry,” said Alan Brookes, the chair of the Kent Association of Head Teachers.

“If grades look better than previous years, then those are the schools [Ofqual] will focus on,” Brookes added. “If you’re a private school or a grammar school or a school in a leafy suburb, it’s a self-perpetuating cycle of expecting higher grades and continuing to offer similar grades.”

“The system is fraught with problems,” added Sir Michael Wilshaw, the former head of Ofsted. “We know teachers err on the side of generosity. They will always give youngsters the benefit of the doubt and there will be grade inflation. It’s a question of how much. I think we will see roughly what we saw last year which was 10-12% grade inflation, somewhere in that region.”

Wilshaw said strong schools in well-run groups or academy trusts would have more robust assessment systems in place, with in-house moderation. “The worry is where you have a school that struggles, a school in special measures, a school where they’ve got a lot of inexperienced heads of department. They would not have the experience to moderate those judgments.”

Schools and colleges must submit all grades by 18 June. They will then be asked to provide samples of student work, plus the evidence used to determine grades.

“The work that Ofqual are making teachers do might make the system seem more valid and reliable,” said Lock, “but in my opinion it will not be any more valid or reliable. It’s not worth the work being done.”

Richard Sheriff, the president of the Association of School and College Leaders, was more upbeat. “Teachers are developing a whole variety of assessments as part of a really robust system that hopefully can deal with the excesses of grade inflation …

One head of department described a bureaucratic process that requires him to fill in a department assessment record justifying each assessment, a teacher-assessed grade record form justifying the grades for each individual student, plus a detailed moderating form on how grades were decided for individual questions.

He is also required to sign a document as evidence that he has read and understood the Joint Council for Qualifications guidance, as well as his school’s own policy, which is 10 documents on its own.

“Our stress is that if our students don’t meet the grade profile for their subject, by grades being either being too high or too low for the school, that it will cause a mini-crisis all over again,” he said.

A spokesperson for Ofqual said it was impossible to know the results picture in advance but it had been “mindful” of teacher workload.

“It is important that schools have evidence to support their judgments, and we have built flexibility into the way that schools and colleges will gather that evidence to determine students’ grades. It’s also important that exam boards quality assure those judgements so that there is as much consistency as possible,” the regulator said.

“Where their overall results at GCSE or A-level look very different from recent years [2017-19], schools and colleges should record the likely reasons for this, as exam boards might ask to see this if the centre is selected for external quality assurance. Centres with the largest differences are more likely to be selected for quality assurance checks.” 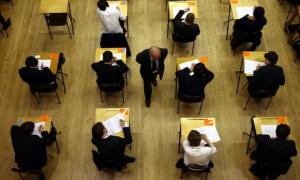 Read More
Written by Sally Weale and Richard Adams,
Source link: https://www.theguardian.com/education/2021/may/09/a-level-and-gcse-grade-inflation-inevitable-in-english-system
Previous Next
Upnext in
Disclaimer UniAgents does not author any news or content in this section. We aggregate News Headlines, Summary, and Content from over 700 sources, explicitly listed in every article/page. Users can visit the sources for full articles and more local news. The sole aim is to aggregate education news from around the world so they can be categorised and the user can have a personalised experience. In some cases, the original article has news in native language but listing on UniAgents for each article is done in English. There are no copyright infringements, as we do not claim to produce any content mentioned on this page, all relevant sources are mentioned. For any clarifications, do not hesitate to contact us.