Go Back to the List October 05, 2018
Challenges of ensuring quality education

Ethiopia is at the crossroads in terms of making a choice between consolidating current higher education achievements – by moving its budget focus to academic activities that improve the quality of tertiary education – or continuing with the old model of expansion that succeeded in creating an impressive number of new universities, but failed to provide the quality of output required.

The success of a HE system is partly judged by the strength of its financing. In terms of budget allocation, the share of GDP allocated by a government to education and how this is divided among subsectors – primary, secondary and post-secondary – is commonly used as a parameter to determine the extent of a country’s financing commitment to its education sector.

The budget allocation pattern within each subsector also relates to either positive or negative changes to an education system. It therefore impacts on critical issues such as quality of education.

The expansion of Ethiopia’s education system in the last two decades has been attributed mainly to the political and financial commitment of the government. Although this has wavered at times, it is ongoing.

Over the years, the total education budget – specifically for HE – has substantially increased. In 1991, education expenditure constituted 2.4% of the country’s GDP and 9.4% of total government expenditure. From 2002-05 the figure rose to 6.1% and 17.5% respectively.

While Ethiopia now spends around 4.5% of its GDP on education – less than the Sub-Saharan average of 4.7% – the share of education from the total annual budget in the last decade has hovered around 20% and above. This rate is higher than the world average for low-income and developing countries.

From 2005-06, 25% of the national education budget was dedicated to HE. It rose to its current figure of 42%, with primary education receiving 46% of the budget. In addition to its significant rise from earlier years, HE financing in Ethiopia – unlike many developing countries where reliance on foreign sources is common – continues to be covered entirely by the government, drawing just 0.02% of income from external sources.

On the surface, the amount dedicated to HE should imply improvement to its quality, but this has not been the case, since the sector continues to be blamed for a deteriorating quality of education. One possible answer to this conundrum resides with the spending patterns of the HE budget.

Despite Ethiopia’s huge financial commitment to education, the HE sector is dominated by capital spending. This trend, which has continued to grow since the sector was reformed at the end of the 1990s, appears to have negatively affected areas that impact upon the provision of quality education.

According to World Bank figures from 2003, capital spending in 1997 consumed 35% of the sector’s budget. In 2003, the combined student welfare expenditure of Ethiopian universities was as much as 20% of recurrent budget (including student feeding, which took 15% of the budget).

From the overall composition of recurrent university budgets, 40% was allocated to salary, 8% to services, 5% to maintenance, and 4% to grants, leaving just 10% for educational materials and 11% to other supplies. After 15 years, the pattern of spending seems to have remained unchanged.

The growth in the number of public universities from two at the end of the 1990s to the current 46 explains the increasing focus on capital investment, with capital spending in the HE sector growing from 35% in 1997 to nearly 75% from 2010-16.

Seventy percent of capital expenditure is allocated to the construction of new universities around the country. A substantial investment by any means, this budget allocation dwarfs that of other subsectors.

The current spending pattern in the recurring budget also reveals that more than half goes to food, housing subsidies and other administrative costs, which have no direct link to the quality of education. Nearly 40% of the recurrent budget is allocated to staff salaries.

There is little evidence, however, to show that this pattern will change significantly. The operational Education Sector Development Programme V (2015-16 to 2019-20), for instance, aims to increase the gross enrolment ratio for HE, from 9.4% in 2014-15 to 15% by 2019-20, and to 22% by the end of 2025.This date has been set down in Ethiopia’s Growth and Transformation Plan for the country’s attainment of middle-income status. This implies that any slowing down of the current expansion drive will be inconceivable in the next decade.

Like any other developing country, the issue of HE financing in Ethiopia is regarded as critical to the success of the sector. In 2003, the World Bank noted that Ethiopia’s financing strategy would hold the key to succeeding in the major challenges of expansion and maintenance of quality while major reforms were being introduced to the sector.

“If the bold vision contained in the new Higher Education Proclamation is to have any chance of success, the solution to this double challenge will have to be found in the financing strategy that underpins and supports these reforms,” it said.

With mounting national concern about the poor quality of HE – and Prime Minister Abiy Ahmed repeatedly vowing to improve the situation – it is clear that the system cannot move forward with the continued use of old assumptions and models.

Some commentators have suggested the need for a period of respite from unabated expansion in the sector that has dictated spending patterns over the past two decades. This, however, is unlikely, given the government’s future plans.

Another suggestion has been to augment the HE budget allocation with an increase in public financing and-or budget trade-offs in favour of the education sector. Given the increasing strain being experienced by the system, the sector may not be able to receive any meaningful increment from its current share or secure possible trade-offs with other sectors in its favour – at least in the short term.

Although government encourages internal revenue generation by universities, this has not yet reached a level where it can supplement substantial fiscal deficiencies, notwithstanding the limited financial autonomy that public institutions have in spending available internal income on activities that contribute towards improving the quality of education.

While possible alternatives are reducing the pace of creating new public institutions, diversifying university income and improving upon their resource utilisation, reconciling the demands of access and quality will require the introduction of new modalities distinct from the brick-and-mortar university model that continues to consume a huge amount of the subsector’s budget.

Therefore, other options should be encouraged. These include distance and online education, expanding a specific segment of the private higher education sector and other innovative modalities that allow the absorption of more students without the quality of education being compromised. 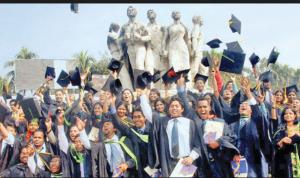 Read More
Written by Wondwosen Tamrat,
Source link: http://www.universityworldnews.com/article.php?story=20181001111308979 | https://www.google.co.in/search?q=Challenges+of+ensuring+quality+education&rlz=1C1CHBD_enIN817IN817&source=lnms&tbm=isch&sa=X&ved=0ahUKEwjbltO88vbdAhUUdCsKHZP8AM4Q_AUIDygC&biw=1360&bih=633#imgrc=dz0dU8oAkH8xEM:
Previous Next
Upnext in
Disclaimer UniAgents does not author any news or content in this section. We aggregate News Headlines, Summary, and Content from over 700 sources, explicitly listed in every article/page. Users can visit the sources for full articles and more local news. The sole aim is to aggregate education news from around the world so they can be categorised and the user can have a personalised experience. In some cases, the original article has news in native language but listing on UniAgents for each article is done in English. There are no copyright infringements, as we do not claim to produce any content mentioned on this page, all relevant sources are mentioned. For any clarifications, do not hesitate to contact us.