Go Back to the List April 24, 2020
'I can't afford rent': the students facing hardship during lockdown

Growing numbers of students are asking their universities for financial support during the Covid-19 lockdown amid warnings that more will face hardship as the crisis goes on.

Many universities have responded by increasing or creating funds for students in difficulty, with some providing subsidized meals for those who remain on campus. In Scotland, the government has announced a £5m package of emergency financial support.

But according to a survey by the National Union of Students (NUS), 80% of students across the UK are worried about how they will cope financially after losing work and support from their parents.

The NUS has called on the government to supply a £60 million hardship fund that would provide students with a “safety net” during the coronavirus lockdown. The NUS also demanded that universities reimburse students’ tuition fees and allow them to retake the year to make up for the disruption to their degrees.

This has been echoed by cross-party MPs, who have asked the chancellor to set up emergency maintenance grants for those who are not entitled to claim universal credit.

Lily Taylor, a master’s student at Sheffield Hallam University, lives off £90 a week after being furloughed from her bar job, along with her savings that will run out soon. “The hardest part is having no space to study,” she says. “In the house, I rent we have a high-up dining table with stools. I have a bad back after an accident a couple of years ago and I can’t sit here for longer than 20 minutes without it being a strain.”

Taylor tried asking her university if it could supply her with a desk chair. She was told to apply for the university’s hardship fund but says her application was denied. “I’m stuck on my own in Sheffield, 160 miles away from my friends and family, and I’m worried about how I’m going to be able to complete my dissertation.”

Sheffield Hallam has launched a crowdfunding appeal to raise money for struggling students after its usual hardship fund was overwhelmed by requests from students as a result of the pandemic.

But students will need to meet certain eligibility criteria to receive support. Sophie Cartwright, a master’s student, applied for the University of Birmingham’s hardship fund after losing her income from three part-time jobs. Although she comes from a single-parent, lower socioeconomic background, she says she doesn’t meet requirements.

“The university requires any postgraduate applicant to have a minimum average of £180 a week in income throughout the academic year in order to even apply to the fund. This is extremely counterintuitive as it means those who most need the financial support are immediately not eligible,” she says.

Some students who have lost their jobs were employed by universities themselves – in campus shops or student unions, for example – and are frustrated by the lack of clarity around the future of their employment.

Issy Emmitt, a third-year student at the University of Bath, was working two jobs on campus before the outbreak, as both a student ambassador and in the campus supermarket. When the lockdown began, she and other student employees were informed via a Facebook page that there was no more work available at the shop.

“Those of us working zero-hour contracts on campus still haven’t been told whether or not we have been officially furloughed or just plain fired yet – four weeks on,” she says. “A coursemate of mine lost three campus jobs and estimates her losses to be already around £1,000.”

In the meantime, Emmitt is worried about how she will pay rent. “I have no savings because of how expensive living in Bath is, and so I’m suddenly in a position where I not only can’t afford my rent but even basic living necessities,” she says. “I also can’t move home at the moment as my father is severely immunocompromised.”

Rent is a major concern for hard-pressed students. Nearly 75,000 students have signed a petition for universities to suspend all student accommodation rent for those who have returned home due to Covid-19.

Many universities have waived rent for the final term of the year, and some for the whole year. But according to the Office for Students, only 19% of students live in university accommodation, with the vast majority renting from private providers. In some cases, students stranded in their housing without an income have organized rent strikes.

For students like Cartwright, financial pressures may be too much. “If I do not receive additional support, I will likely not be able to finance somewhere in Birmingham to live for the remainder of my degree,” she says. “I won’t be able to afford a deposit or save up rent upfront for the new property. Due to the hands on nature of my degree, I need to be in Birmingham to complete my dissertation. I do not wish to drop out, but this is something I’m unfortunately forced to consider.” 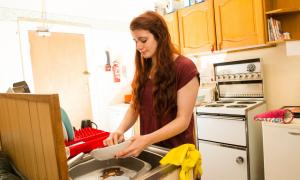 Read More
Written by Alfie Packham,
Source link: https://www.theguardian.com/education/2020/apr/24/i-cant-afford-rent-the-students-facing-hardship-during-lockdown
Previous Next
Upnext in
Disclaimer UniAgents does not author any news or content in this section. We aggregate News Headlines, Summary, and Content from over 700 sources, explicitly listed in every article/page. Users can visit the sources for full articles and more local news. The sole aim is to aggregate education news from around the world so they can be categorised and the user can have a personalised experience. In some cases, the original article has news in native language but listing on UniAgents for each article is done in English. There are no copyright infringements, as we do not claim to produce any content mentioned on this page, all relevant sources are mentioned. For any clarifications, do not hesitate to contact us.