Go Back to the List April 06, 2020
Government ropes in universities to fight COVID-19

The Zimbabwe government has made available an initial ZW$33 million (U$S1.3 million, according to the official exchange rate) in seed capital to state universities to make personal protective equipment (PPE) to ameliorate a national shortage of the materials needed to fight the coronavirus.

On Tuesday last week the cabinet proposed that hand sanitisers and face masks be produced locally by institutions of higher learning and pharmaceutical companies.

According to Professor Amon Murwira, minister of higher and tertiary education, science and technology development, Chinhoyi University of Technology and Midlands State University have started producing face masks, while the University of Zimbabwe and Bindura University of Science Education are producing sanitisers.

Harare Institute of Technology has developed a ventilator and has the potential to make 40 per day, in addition to producing 1,000 litres of sanitiser a day.

NUST declined to respond to questions from University World News, but the university’s director of the Applied Genetic Testing Centre, Zephaniah Dhlamini, told the Bulawayo-based daily, the Chronicle, that the university had machines that can perform diagnostic testing for COVID-19. Dhlamini added that the university was waiting to satisfy some requirements before it could start testing.

Zimbabwe’s national requirements for COVID-19 protection materials are not known, but the country has an acute shortage of ventilators, face masks, sanitisers and testing and isolation centres.

Murwira said universities were manufacturing PPE material as part of their community service to the nation during this time of crisis.

“Universities are not there for show. The anchor for all industrial production comes from the institutions of higher learning. As a nation we have refocused from education 3.0 to education 5.0, which basically means that universities must be able to produce goods and services. So, in times of crisis, we expect universities to join in the fight and not to sit at home,” he told University World News.

The universities have been deemed an essential service contributing to the fight against COVID-19; hence their ability to produce materials is not expected to be curtailed by the current national lockdown.

Asked to vouch for quality of production, Murwira said he believed that the universities would do a good job.

Chinhoyi University of Technology (CUT) Director of Marketing and PR, Dr Musekiwa Tapera, confirmed the university was producing face masks through its Clothing and Textiles Unit, an internal facility that has always been involved with production of gowns and protective clothing for the market.

“So far we are producing between 2,500 and 3,500 masks per day, everything being equal, but we are sometimes constrained by load shedding. The Clothing and Textiles Unit is at an advanced stage to commence the production of sanitisers,” he told University World News.

Tapera said CUT had so far supplied heath-related institutions and was now gearing up to supply other government institutions such as the police and other public interface institutions, to help combat the spread of the virus.

As at 5 April, Zimbabwe, which went into national lockdown on 31 March to manage the coronavirus, has reported nine confirmed cases, including one death. 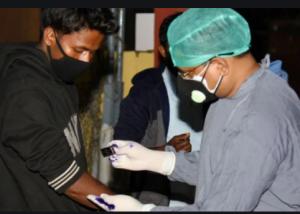 Read More
Written by Tonderayi Mukeredzi,
Source link: https://www.universityworldnews.com/post.php?story=20200406073439527 | https://www.google.com/search?q=Government+ropes+in+universities+to+fight+COVID-19&rlz=1C1CHBD_enIN817IN817&sxsrf=ALeKk0257X3K4Q4PR47FXsX-J2NQh4GtcA:1587197209558&source=lnms&tbm=isch&sa=X&ved=2ahUKEwjkuvSuwvHoAhX0jOYKHSliCWwQ_AUoAnoECAsQBA&biw=1360&bih=6
Previous Next
Upnext in
Disclaimer UniAgents does not author any news or content in this section. We aggregate News Headlines, Summary, and Content from over 700 sources, explicitly listed in every article/page. Users can visit the sources for full articles and more local news. The sole aim is to aggregate education news from around the world so they can be categorised and the user can have a personalised experience. In some cases, the original article has news in native language but listing on UniAgents for each article is done in English. There are no copyright infringements, as we do not claim to produce any content mentioned on this page, all relevant sources are mentioned. For any clarifications, do not hesitate to contact us.